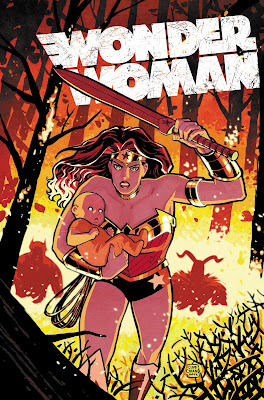 Wonder Woman has finally discovered her heritage, as well as all the family that comes along with it. However, as she digs deeper into her familial tree, there's as many Gods that are willing to lend her a hand as there are those that would do her harm. Wonder Woman continues on her search for her friend Zola's baby, not knowing who she can trust. So when she discovers New God Orion at her doorstep, is he here to help her—or destroy her?

Wonder Woman has always been a character that I've found it massively hard to get interested in.  For me, she's a bit of a hit and miss character.  It's the same in the myriad of animated adventures that her character has been in such as the 'Justice League' cartoons and others.

That's when I had heard such good things about the new run with the character after the 'New 52' revamp so I figured that I would give it a go to see if my opinions on the character would change.

While this is a good release for the character with both a shorter story set in the characters youth as well as the main story itself, I just found that I couldn't get as gripped with the adventure as I would have with other characters.

That's not to say that it's written  badly but for some reason, I just didn't have that connection with the Wonder Woman character as I do with some of the other DC characters such as Batman and Superman.

The writing here is fast paced and has some really exciting moments.  I can most definitely see why the fans are falling over themselves to read these stories as they really have revamped the character quite well.  They've changed enough to make the character interesting yet kept enough things to keep the older readers and that must have been a hard line to tread.

Art wise, it's superb.  I liked the balance of the exciting but cartoon style art work in the first story and the darker, grittier art in the main story.  Cliff Chiang has always been a very dependable artist but for me, there always seems to be a little something missing from proceedings and it's the same here.  I suppose I was just expecting a little more 'bang for my buck' art and story wise.

All in all, this is definitely a good book for the Wonder Woman fans out there.  If you're not a fan of the character or haven't read a lot of her recent tales then you might find yourself a bit lost here and there.  Overall however, I found this to be a well paced and well drawn title yet I couldn't help but think that there was something missing.