What Doesn't Kill Her By Max Allan Collins Review 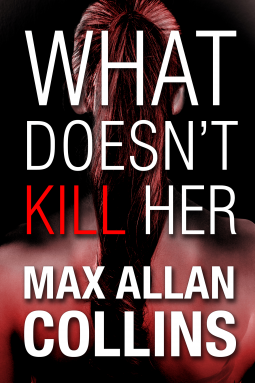 Jordan Rivera is an ordinary kid with an ordinary family, until a vicious killer takes it all away, sparing her, but leaving her broken. The murders of her father, mother and brother destroy something inside Jordan, who spends ten long, mute years in an institution. Catching a glimpse of a news report about another family slaying, Jordan at last breaks her silence. Now she’s out, and she molds herself—body and mind—into an instrument of justice.

While a young detective pursues the case on his own, Jordan teams up with members of her support group, people like her, damaged by violent crime. They have their own stories of pain, heartache, and vengeance denied. With their help, Jordan will track down the killer before he can ravage any more lives. Her life – and her sanity – depend on it.

Since staring this blog and review site, I've been reading a hell of a lot of thrillers and even had the pleasure of reading then reviewing a Mike Hammer story that had been finished by Max Allan Collins himself.

So when this one came out, I was massively excited and started to read it straight away.

I was not disappointed in the slightest.

What we have here is a book by the master of the thriller.  It's well paced and has some superb twists and turns throughout the book.  That really works so well because of the characters that Collins has created and how he uses them.

That has always been one of his strong points to his writing.  The best of the characters by far is Jordan Rivera.  The way his wonderfully descriptive writing shows just how the brutal events of the invasion have affected her and then the aftermath of her trying to piece her life together.  He shows a supreme skill for using a subtle  hand when needed but then forcing the tension up to really hook the reader in.

I don't want to spoil the story too much for you by describing every little detail but there are some absolutely fantastic scenes in here that really will get under your skin.  The only part of the book I didn't like was the reveal of the murderer.  The fact that it was someone that the police had never suspected was extremely well done and built it up in a nail biter of a reveal yet when you find out who it actually was, it just felt a little bit off and not as shocking as it seemed like it was going to be.

All in all, if you are a Max Allan Collins fan then you are definitely going to pick up this book and be hooked in until the final page.