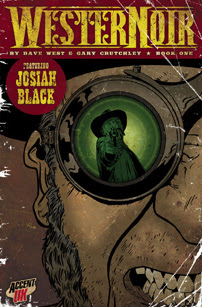 Written By Dave West
Art and Cover By Gary Crutchley

'WesterNoir' tells the story of Josiah Black, a man who has seen and done everything but in this book, his life is about to get a hell of a lot more complicated and dangerous!

I've been reading quite a few western titles here and there ranging from the funny to the serious and everything in between.

After reading the book 'The 6 Gun Tarot' by RS Belcher, I was eager to read another western story but one with a difference and that is what we have here.

I'm not going to spoil the story for you but there's a really good supernatural edge to it but also a good and interesting twist at the end.  It left me itching to get to book two to see where the character is going to be taken next.

The story moves along at quite a fast pace but I liked the nods to Josiah Black's past but at the same time, leaves a lot to the imagination of the reader.  I've always enjoyed a title more when the writer takes the time to read the character in that style and doesn't insult the reader's intelligence.

As for the setting, the story manages to avoid the cliches that sometimes plague a western title.  In fact, while the writing does give a nod to the classic western style, at the same time it hurtles along to really get the reader in to the thick of the action.

The art here is superb.  The stark nature of the black and white art really makes some of the scenes look desolute and hopeless but in a way that makes the darker nature of the story come to the forefront off the book.  I also loved that some of the panels didn't go for the normal, bog standard angles to show us the action unfolding.  Instead the story had quite a cinematic yet subtle feel to it.

At the end of the main story, you get an extra tale to whet your appetite named 'On Hallowed Ground' that shows a little bit more of the Jim Wilson character.  That adds a nice and unexpected layer to this book as it gives the character a little more depth than he would have had otherwise.  Once again the art is fantastic at conveying the dark and sinister nature of not only the story but it's surroundings as well.

Add the art to the intelligence of the writing and that makes this a title that I will definitely be keeping up with.

You can buy 'WesterNoir' books 1-3 from here!
Posted by Pat Scattergood at 14:28