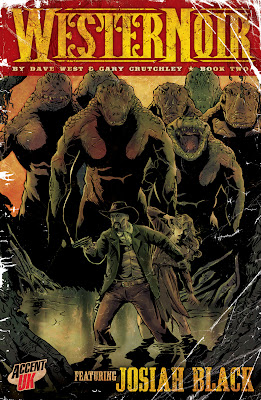 Josiah Black.  A man with a mysterious past now working for a very secretive man.  Something not quite right is going on in the world and Black is determined to find out what is, no matter where in the world it takes him.

Surrounded by swampland, Black may have met his match in the shape of the 'gators that roam the swamp but these aren't just any ol' 'gators.

After the absolutely superb first book by West and Crutchley, book two had a very high standard to live up to.

Not only did they match the quality of the first one, I think they even managed to better themselves with this one.  Set in a dark and dank swamp, Josiah Black has to get to the bottom of a mystery surrounding missing women, hushed secrets about the woman living there and rumors of 'gators decimating anyone that gets in their way.

The story once again moves at a cracking pace and really hooks the reader in to the story.  That's in part to the superb team of West and Crutchley.  The writing and art fit together like a well made jigsaw to such an extent that I couldn't imagine anyone else doing this title.  It's a bit like Bendis and Oeming and their 'Powers' comics.

Atmosphere wise, the writing really gives the reader a sense of dread throughout the story but it's most evident during the scenes in the swamp where Black is literally fighting for his life against the malformed 'gators.  That's where the superb artwork really comes to life the most as well.  The stark artwork by Crutchley really brings the scenes to life and gives it a classic Universal horror movie feel while still feeling utterly original.

The character of Josiah Black is a very interesting one and we get a little bit more of a glimpse in to his psyche.  I like the way that we, as readers, are being fed little bits of information about the character a little bit at a time so that our imaginations can feel in any blanks.  That style of writing credits the reader with having a good sense of intelligence instead of feeling like they have to over explain everything.  I also like the way that sometimes, there aren't clear cut reasons or excuses as to why things happen or how to take care of them.  I also like the way Black comes across as a mix of Jonah Hex and Clint Eastwood but still is his own character.

This title just gets better and better so I personally can't wait to get my beady little eyes on book three to see where they are going to take the character next.  Definitely one to pick up for fans of well written and exciting stories with a supernatural tint but worth taking a look at for the superb yet stark art used to get the atmosphere to creep under the skin of the reader.

You can buy the WesterNoir books from here!
Posted by Pat Scattergood at 06:22