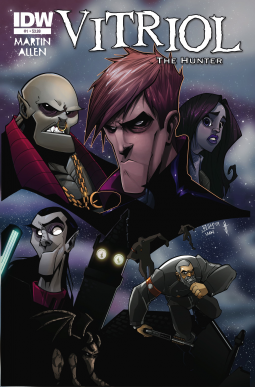 They own the night... they yearn for the day! In this gothic sci-fi adventure, Billy Martin (guitarist of Good Charlotte) and Brent Allen bring a new grisly horror to life!

As Basilika City’s last great hope, Vitriol stands as the only force that can stop Lord Barthus and his heinous vampire regime from overtaking the city!

Apparently 'Vitriol the Hunter' was meant to come out in 2010 but has only just landed in stores as a graphic novel after a run as a comic book series.  To be honest, that should have been my first warning about the quality of the release.

Billy Martin, yes the guitarist from Good Charlotte, has co-written and done the art for this gothic, science fiction story that in all honesty, feels like bad fan fiction more than anything else.

The main problems that I had with the writing were that for one, the writing was massively repetitive.  It just seemed like they kept using the same dialogue and lines over and over.  It was almost as if I kept reading the same page over and over.  Another thing I hated was the sheer unoriginal nature of the story.  It was almost as if they'd watched a ton of 'teen' vampire movies and read a ton of young adult vampire stories and dumped all of the bits they liked and made it in to a graphic novel.

When the story attempts to be deep and intellectual it just comes across as a cringe worthy and that's the polite way to put it.  The fact that the characters had next to no personality and the little boxes explaining what was happening in the panels.  That just shows how poor the writing and the art is for this tale.

In all honesty, there was so much wrong with this title that it was a battle just to get to the end of the story.  There were many moments where I actually groaned out loud at some of the poor writing and in all honesty, it's not one that I'd be in any rush to go back to this title anytime soon.

'Vitriol the Hunter' is available to buy from November 5th 2013
Posted by Pat Scattergood at 15:16