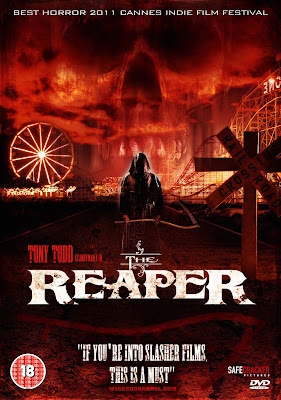 (AKA Jack the Reaper)

Written and Directed By Kimberly Seilhamer

As a punishment for failing a test on the industrial revolution a group of teens are taken on a field trip to a railroad museum where a mysterious Mr. Steele (Tony Todd - "Candyman") tells them about "Railroad Jack"- a cold-blooded "Reaper" - an horrific creature who ushers souls to the afterlife and is known to haunt a stretch of desert highway called "Death's Door".

On their return they travel along "Deaths Door" and their school bus crashes right beside a strange, deserted fairground. Enticed by the lights and the sounds of this deadly carnival, the teens set out to find help. But terror ensues when they discover the carnival is Jack The Reaper's hunting ground. "Railroad Jack" (Douglas Tait "Freddy v Jason") has been waiting for them, armed with a pickaxe and he has laid claim to their souls.

When I saw the trailer for this movie I was majorly excited about getting this stuck in to my DVD player and kicking back to be entertained by a horror movie.  Not only a horror movie but a horror movie starring the legendary Tony Todd.

The movie starts off relatively slow to pretty introduce the characters that are going to the lambs being lead to slaughter for want of a better term.  While the characters aren't the most original in the world, although to be honest they pretty much never are in slasher movies, there are a couple of stand outs for  me.  One of the funniest is a foul mouthed grandmother dropping one of the characters off.  I don't want to ruin it by saying who it is but believe me, it's hilarious.

One of the best parts of the movie is Tony Todd by far.  Even though he is only in the movie a short time, he is his normal creepy self and is the most interesting part of the movie.  It's a shame he isn't in it more but what we got was great.

The rest of their cast do their best with what's there but they're not super memorable.  The makers of the movie do try to shake it up a bit by having an albino kid, a deaf lady, two African American kids etc but you don't really expect the characters to be Shakespearean in this sort of movie.

I really did like the killer in the movie and really liked the fact that they  gave a little bit of a back story to the character but left a bit of it to the imagination.  Also some of the deaths that he was involved in, were actually pretty well shot and much better than the budget would normally have given us horror fans.  I did especially like the way he would mock the characters before 'doing the deed' because it really did make him seem like a completely evil a-hole.

The one thing that put me off a little about the movie was the voice over at the beginning and ending of the movie.  I get that they were trying to set up a mythology for the character but for me, it just didn't work and kind of took away from the spooky feel of the movie.

All in all, this isn't the most original or exciting horror movie ever made but it is worth picking up for a wonderfully creepy performance from the brilliant Tony Todd and some interesting deaths.