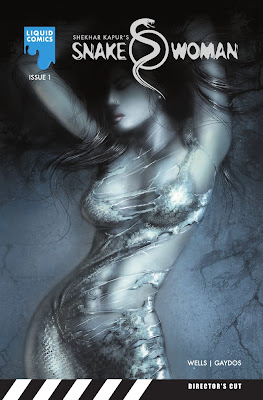 After revealing the back story of the Snakewoman in issue 0, her story begins here as she comes face to face with one of 'The 68'.

After the massively well done issue 0, I quite literally could not wait to get to issue 1 and see just how it was all going to kick off.

Well, I have to admit that I was massively impressed with how the story continued here as the intelligent writing once again moves the story along really well.  There's a little bit more of the back story for the main character, you the first appearance of a member of 'The 68' proper as well as the bloody aftermath and we get the introduction of a new character.

That's a hell of a lot to cram in to one issue yet they manage to do so without overloading the reader.  In fact, the pacing of the story is the main strength of this title.  It moves along at a good pace yet Zeb Wells seems to know when to reveal or introduce a character at just the right time to get the desired response from the reader.

Once again, the art is spot on perfect for the story.  The way that Michael Gaydos uses the shadows and surroundings to created atmosphere is fantastic.  Not only is the writing intelligent but the art really brings out the feeling that the main character is scared that she is going insane without falling in to the trap of melodramatic facial expressions.

All in all, this is another fantastic issue in the story of 'Snakewoman' created by the acclaimed filmmaker Shekhar Kapur and is well worth picking up.