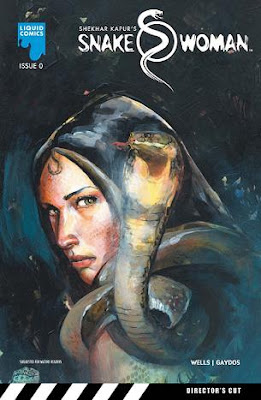 Created By Shekhar Kapur
Written By Zeb Wells
Art By Michael Gaydos, I. Jeyabalan and A. Selvan
Lettering By Ravikiran B.S. and Sudhir B. Pisal

Within three years, she will have killed 68 men.

Jessica Peterson is learning first-hand that the cycle of revenge cannot be broken. Without understanding why, she finds herself turning into a creature - a vicious Snakewoman. Her mission - to avenge a centuries old wrong that was conceived half a world away, deep in the jungles of India.

Terrified by her true nature and hunted by a mysterious organization known only as "The 68," Jessica must confront the monster that lurks inside her before it is too late.

I have to admit that I stumbled on this title by complete accident after being recommended to try out a site called 'Scribd' so I figured I'd have a rummage so to speak.

When I came across the title, it sounded really interesting but the selling point for me was the fact that the character was created by Shekhar Kapur.  I've always been impressed with how many layers he gives his characters in the movies he makes so I had really high hopes here.

Those hopes were more than met with this issue.  The best way to look at this one would be as a sort of origin story for the character and as a way to show the reader why she is on this mission to find the 68 people that she is hunting for.  To that end, it works incredibly well and really hooked me in.  I actually really wanted to know more about the characters in the story and loved just how they set up the back story for them all.

The idea of revenge and coming back to avenge wrongs in a past life isn't a new one in comics at all but the writing here gives it a spiritual spin and I really liked that.  To me, that added a whole new layer to the idea and the strength of the writing by Zeb Wells really brings a subtle but exciting hand to the story.

However it's the art that really impressed me most of all.  The art has a bit of an otherworldly feel to it, an almost ethereal feel, that gives it a dark yet quite unique look for the story.   I would go so far as to say that this style of art is completely perfect for the story.  I honestly couldn't see anyone else providing the art for the story.  It's really that good and works that well.

If you can get your hands on a copy of this, I would definitely recommend it.  The story is incredibly strong and the gorgeous and quite unique art style works fantastically well together.