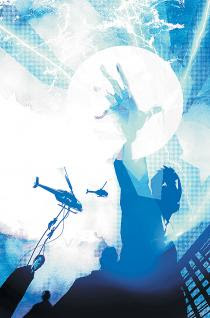 Very little is known about the secret government agency simply named "Division."  That is no accident.

Run by veteran spymaster Sam Miller, Division fields an elite group of special agents gifted with psychic abilities - telekinesis, psychometry, precognition among them - but among them, there is only one shapeshifter, Senior Agent Ezra Lowe.

Ezra was the first agent Division ever  sent into the field, the one Miller trusts to lead his secret forces in to battle.

What's more, Ezra is a believer...until a series of blown missions shakes his unwavering devotion.

An attempt on his life by the very people he used to command sends him on a collision course with the agency he called home and the man he loved like a father.

I have to admit that even though the movie had it's fair share of flaws, it was still a very enjoyable look at what would happen if there really was a group of people with majorly impressive powers.

This graphic novel release from Wildstorm, an  imprint of DC Comics, is the prequel to that and has a fair bit to live up to.

You know what guys and girls?  I actually much preferred this one to the movie itself.  In fact, I kept thinking that this would make a fantastic  movie in it's own right.  One of the things that did put me off at first was that sometimes when you get a prequel release like this one, they tend to play it safe so that they can just make it to when the movie itself starts.  However, this one didn't do that.

Thanks to the fast pacing and well written story, the movie manages to move along really quickly to hook in the readers but at the same time, they still manage to find time to make the characters fully formed and well rounded.  There are a couple of characters that come across as a bit cliched and just there to make up the numbers but that doesn't really affect the story all that much.

One of the other things that I really liked were the sheer amount of twists and turns.  It's true that a couple of them didn't really come across as shocking as the writers would have liked but at the same time, they still manage to set the reader up for some quite shocking ones later in the graphic novel.

Art wise, some of the panels are a little hit and miss in places but really explode in to life on the action set pieces.  In fact, the art here really makes the powers that the characters have come across to the reader in a large and cinematic way but without drowning out the intelligent story telling.

If you liked the movie starring Dakota Fanning and Chris Evans then you are most definitely going to really like this prequel release as it really sets up the movie superbly.  If you haven't seen the movie then don't give this one a miss because you would still be missing out on a great story and it doesn't even matter if you've seen the movie or not.

All in all, a great prequel release by Wildstorm.