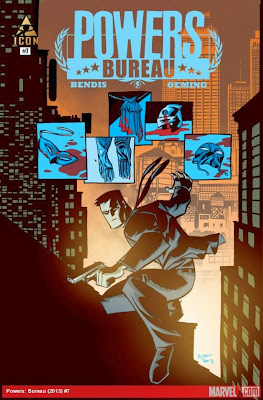 After the shocking events of issue 6, Pilgrim and Walker are summoned to the bloody scene of a brutal murder.  The suspect has been caught at the scene.  Or has he?

I have to admit that I was quite disappointed with issue 6 that marked the end of the first story line for the 'Powers Bureau' comic book.  It started off with a bang but then petered out towards the end so I was looking forward to seeing if they could regain the lost momentum.

Well, this was most definitely a massive improvement on the last issue.  It's a one shot story with issue 8 starting the new storyline but it works well.  It brought back memories of the original 'Powers' and the reasons why I feel in love with the title in the first place.

The story itself is interesting, well paced and has some great twists throughout.  The reasoning behind the murders at the end of the story is an interesting one and really raises some good ethical questions of when something is wrong and when something is acceptable.  That's down to Bendis' writing that seems to be back on track after the miss step of the last issue.

As always, the art by Michael Avon Oeming, is top notch.  The murder scenes in particular are very well done with a brutal, dark and grimy honesty.  It comes across like an 80's horror movie but in a very good way because that really keeps the action moving.  Oeming has always had a knack for being able to create a great mood for whatever title he's working on and that's what he has shown here.

With not only an interesting story with some great questions of morality being asked but also with a massively heartbreaking ending, this is a vast improvement on the 6th and quite disappointing issue.  Well worth picking up so see 'Powers Bureau' back on track.