Once Upon A Time: Behind the Magic Review 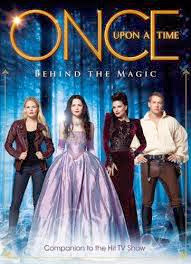 'Once Upon a Time' is one of the most original and exciting shows on television, combining fairy tale magic with real world drama and appealing to audiences of all ages around the world.

In this official companion to the hit show, you can go behind the magic, discovering everything that goes in to the making of the enchanting series.

Plus the show's producers, writers and behind-the-scenes wizards share their secrets about creating the magical episodes you see on screen, including production art and sketches.

I have to admit that while I wasn't all that familiar with the actual 'Once Upon a Time' series itself, I'd caught a couple of episodes here and there.  After being offered the chance to review this companion book to the  series, I figured that I would catch up by watching some on Netflix and discovered, much to my delight, that I've been missing out on a really good series.

After reading this behind the scenes book, I was struck at how much the people involved in the series really love what they are creating.  It really does come across as a labor of love for the cast and crew.

In fact, that's where this book really shines.  The cast and crew seem so proud of the show that that they really have gone 'all out' with this book.  No stone is left unturned and you get an absolute plethora of information, facts and much more yet it's done in such a way that you don't feel overloaded with information or feel over your head with the facts and figures.

There are numerous interviews with the many cast and crew members about the writing, the cast, the portrayal of the characters and there are some absolutely brilliant sections about the special effects, the sets and even the props.  I loved the fact that some of the things you may not even have noticed on the first viewing are giving so much thought that the writing about the ideas behind them is incredibly interesting.

The cast have some really familiar faces amongst them for the readers of this site.  For the 'B' movie fans out there you have Lana Parilla, from the movie 'Spiders' and for the 'House' fans out there you have Jennifer Morrison.  You also have the massively under rated Robert Carlyle too and all of them, and more, are interviewed in some very honest and interesting interviews.

All in all, if you are a fan of the show then this is an absolutely essential purchase for you.  In fact, why haven't you got it already?  If you're not or you're not all that familiar with the show this is still worth getting because the sheer volume of interesting information.  The best of these being the behind the scenes moments talking about how they do the special effects on a television show budget and also the parts about the props were detailed but never boring.  Well worth picking up.

Email ThisBlogThis!Share to TwitterShare to FacebookShare to Pinterest
Labels: Behind the Magic, Book, Fantasy, Once Upon a Time, Review, Television Tie-In, Titan Books