No Clowning Around Review 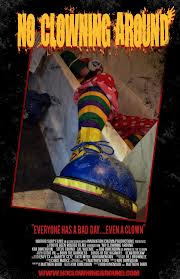 Ed, who was once beloved by his hometown as Mumbles the Clown is now a party clown who battles depression and addiction.

His last shed of light in his life Trixie, has struggles of her own.

Being pushed from all sides, who and what will stop this endless spiral or sadness?

I was massively looking forward to this after reading the 'Mumbles the Clown' story in the 'Living Corpse' one shot that Dynamite Entertainment put out recently.

When it started, I was absolutely hooked from the beginning right through to the admittedly bloody end.  One of the things that hooked  me in was the look of the movie.  It looked like a classic 80's B movie and as we all know from reading this site, I love my 80's B movies.

Another thing that hooked me in was the performance by Rob Dimension as Mumbles the Clown.  He portrays the spiral into depression then madness superbly well.  I really wanted to see more of the character and was actually quite disappointed that it had ended.  I loved how the character was all over the place because that really does show how the mania that is sometimes connected with severe depression.

The dark humor throughout the film was very well done.  In between feeling sympathetic for the character and then laughing at the sheer randomness of what is happening, you are just positively hooked.

I would be remiss if I didn't mention the wrestling superstar Steve Corino, who does a fantastic job as the protagonist of the movie.  He just oozes spite and comes across as a complete a-hole so you can't wait to see him get what is hopefully coming to him..

If you get the chance to see this superbly made short then do.  It's a great look at someone struggling with severe depression and then descending in to madness coupled with some darkly comic moments as well, especially those involving the talking puppet.  Well worth checking out.