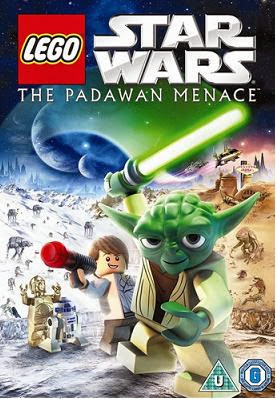 Star Wars and the LEGO Group join forces for this all-new animated adventure.

A routine Jedi Academy field trip is turned into a rip-roaring comic adventure in LEGO Star Wars: The Padawan Menace.

Tour guide Master Yoda leads a group of rambunctious Jedi younglings through Senate chambers when he senses a disturbance in the Force. Summoned to help save the Republic, he discovers that one of the younglings, Ian, has secretly boarded his ship... and young Ian has a taste for adventure!

Meanwhile, C-3PO and R2-D2 are put in charge of the boisterous group and find themselves in over their heads. As the evil Sith prepare to wreak havoc, it's up to Yoda and the Droids to ensure that their young charges aren't torn to bits.

When my son was given this as a gift and we sat down to watch it, I have to admit that I wasn't really expecting all that much from it.  I suppose I was a bit jaded from the whole 'Episodes 1-3' debacle.

Well, all I can say is, strap yourself in and prepare to laugh yourself absolutely silly.

While there are a lot of continuity errors in relation to the original movies, that is besides the point.  It's not really meant to be watched in relationship to those movies.  In fact, it plays as a homage or tribute to the original movies with loads of jokes that the diehard fans will absolutely howl with laughter at.  Don't worry if you aren't a 'Star Wars' fan however.  There are so many jokes firing out that there is a bit of humor for absolutely everyone from nods to the those movies to classic movie and television shows and much more.  My favourite joke of the movie by far was the fact that Darth Vader kept straying in to the shot and George Lucas would come out and tell him off before leading him away.

The animation looks absolutely superb.  It's crystal clear and massively true to the spirit of 'Lego', if 'Lego' has a spirit that is, and the characters look fantastic, especially that of the 'Lego' George Lucas.

Special Features wise there are some great little bits and pieces here.  You have some extra cartoons, two normal 'Lego Star Wars' ones and the 'Clone Wars' animated comics, all of which are absolutely hilarious and the two part 'Star Wars in Two Minutes.

All in all, if you can pick this one up then I urge you do.  It's an absolute riot of humour for both the kids and some of us bigger kids.  Well worth picking up.

Posted by Pat Scattergood at 03:28