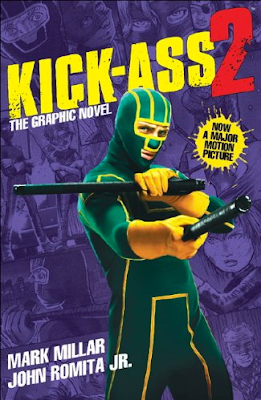 Armed with minimal combat training and a pair of batons, Dave Lizewski donned a mask and set out to become a real superhero, Kick-Ass.  And he succeeded.  Wildly.

Kick-Ass and 'tween black belt Hit-Girl took on the mafia - and won.  The idea went viral.  Suddenly, it became fashionable to put on a costume.  Everyone wanted to be a superhero.  The next logical step for Kick-Ass?  Join a superhero team.

But Kick-Ass' former ally, Red Mist, thanks heroes are passe.  Red Mist will be the world's most notorious supervillain.  When he targets Kick-Ass' family, can Kick-Ass stop Red Mist and his team of villains?  And when the conflict becomes a massive-scale riot in Times Square, can Kick-Ass survive being a hero?

After reading the first 'Kick-Ass' series and the bridging release called 'Hit-Girl Prelude', I was quite eager to get my hands on to this.

That said, I have to admit that I had put off reading this one as it really seemed to divide fans of the first one massively.  In fact, it kind of came across as the 'marmite' of the comic book world.  You either loved it or hated it.

When Titan Books offered me a chance to read it, as it was being re-released in time for the new movie, I jumped at the chance.  What would Kick-Ass and Hit-Girl be getting up to in this one?  Would be as gripping as the first one?  Would be as darkly comic as the prelude release?

Well, yes and no.  What we have here is pretty much a case of 'more of the same' so to speak yet it seems to have the route of 'bigger is better' with the violence and the story.  For me, that just didn't work as well as it did in the first story.  While the set pieces have an epic, cinematic style feel to them thanks to the art as well as Millar's writing, it just felt a bit off.

Don't get me wrong, it's not terrible.  Not by a long shot.  It's still a good and fast paced read.  The characters are fleshed out a little more and you get to see the aftermath of the things that happened in the first story, which was a good touch.  Yet some of the more graphic moments just seemed to be happening for the hell of happening and not to further the story.  I get that the villain, the newly christened 'Mother Fu*ker, wanted to be such a big evil villain that nobody would forget him yet even despite that, it just seemed to not work.  There was so much going on in places that you really couldn't keep track of it to effectively get a reaction out of you while reading it.  That's a real shame because I really liked the idea of the Mother Fu*ker character just paying people to do all this crazy crap so that he didn't have to.

The art is, as always from Romita Jr, superb.  I would definitely say that he is very close to being his fathers equal art wise because he seems so at  home no matter what kind of story he is illustrating.  That's no different here.  The action scenes really do look like a movie unfolding on the page so, and yes I'm digressing, I'm quite interested to see how they'll be portrayed in the movie itself.

However, all that said, one thing really bugged me and that was the ending between Kick-Ass and the Mother Fu*ker.  I won't spoil it here but after all the stuff that the character of Kick-Ass had been put through, the ending just seemed to spoil it for me.  It had me just looking at the panel and saying "what the Hell?" and not in a good way.

All in all, while I found this one to be a bit disappointing in places, it's still worth picking up if you are a fan of the movie or the first story.  I suppose after being so entertained with the original that maybe this one had no chance of being able to fill it's shoes.