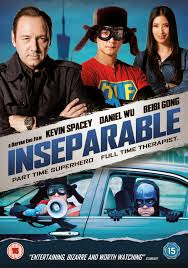 Written and Directed By Dayyan Eng

After a series of tragic life events, Li (Daniel Wu) is burnt out. His beautiful but increasingly moody wife is never home, the unpaid bills are piling up and his work is pressuring him to lie at a public hearing. With seemingly no options left he decides to end it all. But he can't even do that right.

Enter Chuck (Kevin Spacey), Li's wise-talking American neighbour who takes Li under his wing and encourages him to stand up for himself and the exploited people around him. Together they hit the streets as superhero's much to the bewilderment of those around them. After initial success it becomes clear that Chuck is not really who he says he is and Li may be in serious trouble.

Despite being one of the Wall Street Journal's top ten Asian movies to watch in 2011 and having the powerhouse name of Kevin Spacey involved, this movie isn't very well known at all and that is an absolute shame.

For a movie that tackles many difficult subjects while managing to be heartfelt and funny without being depressing and draining, more people really should be able to get their hands on it.

It's true that it's not the most original movie in the world with some of the action maybe seeming familiar to anybody that has seen movies such as 'Defendor' or 'Griff the Invisible' but it's the writing and the cast that make this a movie that is a definite must watch in my opinion.

Firstly, the writing can be taken on many different levels.  On one hand you have a story that a man starts to descend in to madness and wants to become a superhero.  On the other hand you have a story about how the modernisation of China is slowly causing some of the older traditions and beliefs to fall by the wayside as if they're now not needed.  You also have a movie that deals with the sensitive subject of depression, suicide and grief.  Yet as well as all of these things, you also have a movie with a fantastically playful side that shows how friends and loved ones can pull you through anything that life decides to throw at you.

All of these brilliantly written things would mean nothing if you didn't have a cast that could pull off multi-layered performances to match the writing but luckily we have exactly that here.

We have a beautiful and sometimes heartbreaking performance from Daniel Wu.  The way he portrays someone that is majorly struggling with grief and heartbreak who then starts to descend in to mental problems is wonderfully done.  When he meets the character of Chuck, he ramps up the energy and really plays that side of his personality well without making the portrayal disjointed.

Talking of Chuck, he's played in a brilliantly manic way by Kevin  Spacey.  The way he chews the scenery one moment but is then calm the next is a great and realistic version of how easily a persons mood can change when heavily depressed.

Sadly, there are next to no special features on the disc other than a trailer.  That's a real shame because I would have loved to have seen some 'making of' featurettes or even some interviews about the movie but I suppose not every DVD can be packed full of things like that.

All in all, while a quite unknown movie, this definitely deserves to be seen by more people.  It's funny, exciting, heartbreaking and very memorable at the same time.  Well worth picking up just for the two performances by Kevin Spacey and Daniel Wu.

Sadly the lack of special features brings the score down quite a lot but ignore that.  This is a movie that really is worth digging out and watching.

Posted by Pat Scattergood at 10:34