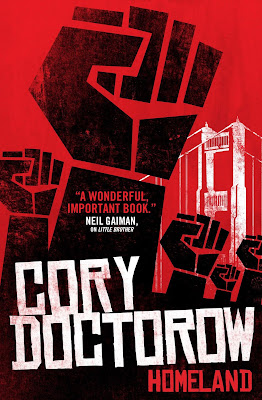 Marcus Yallow is no longer a student. California's economy has collapsed, taking his parents jobs and his university tuition with it.

Thanks to his activist past, Marcus lands a job as webmaster for a muckraking politician who promises reform.

Things are never simple, though: soon Marcus finds himself embroiled in lethal political intrigue and the sharp end of class warfare, American style.

Since I started to write my blog / review site, I've been reading a lot of Cory Doctorow, although that's just  coincidence right?

Either way, I was excited to get to this one published by Titan Books.

At times Cory Doctorow can be a bit preachy and has a habit of being slightly heavy handed at times but here, that seems to be kept in check.  The story moves along at a good pace and builds up a lot of momentum but then the ending lets it down a bit but let's not get ahead of ourselves.

The story itself is a good one.  Starting during a festival called 'The Burning Man' and then  moves in to a political and technological thriller that has paranoia running all through proceedings.  I have to  admit that despite being a bit of a nerd, apparently, I'm not all that tech savvy so learning some of the things in this book really opened my eyes to just what can be done with technology.  It also comes across as quite scary with some of Doctorow's visions of the near future as well.  A lot of the time a book like this can come across as unrealistic yet with the pacing and the addictive reading that hooks the readers in, the story itself feels like it could happen in real life at any moment.

Character wise, despite this being a sequel, the characters still seem interesting to a new comer such as myself instead of letting the reader get confused.  There are nods to the first book, 'Little Brother', but they're done in such a way that I really enjoyed them as a new comer but don't think fans of the first book would mind them all that much.

Doctorow's wonderfully descriptive writing style really hooked me in as a reader.  I couldn't stop myself turning page after page to see just what was going to happen next.  The one thing that bugged me was the ending.  It didn't really seem to resolve that much, there were loads of loose ends that were left unexplained and that kind of bugged me a little.  It's not a massively bad ending, it's just that it didn't live up to the rest of the book.

Despite the ending, this is a very good book and fans of Doctorow will most definitely lap it up.  Personally I preferred 'Pirate Cinema' but that's just a preference on my part.