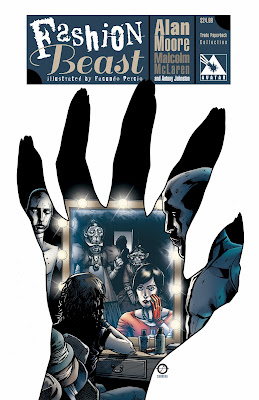 A lost masterpiece from the creator of 'Watchmen', 'V For Vendetta' and 'From Hell'!

The mid-80's were a stunning period of brilliance for Alan Moore, seeing him create true masterpieces including 'Miracleman', 'Watchmen' - and 'Fashion Beast'!  Working with Malcolm McLaren (Sex Pistols), Moore turned his attention to a classic re-telling of a 'Beauty and the Beast' through his unyielding and imaginative vision.

At long last, 'Fashion Beast' is presented in deluxe trade paperback and hardcover collections of the complete ten issue series.

Doll was unfulfilled in her life as a  coat checker of a trendy club.  But when she is fired from the job and auditions to become a 'mannequin' for a reclusive designer, the life of glamour she always imagined is opened before her.

She soon discovers that the house of Celestine is as dysfunctional as the clothing that define the classes of this dystopian world.

Alan Moore.  A name that is massively well known in the comic book and has a legendary reputation as a man who can write classic and memorable characters and stories.

When it was announced that Avatar press had found the lost script for the unmade 'Fashion Beast' movie that was written by Moore himself with the equally as legendary Malcolm McLaren almost 30 years later with an intention of making it in to a comic book series, I was both excited and hesitant in equal measure.

Would the fact that it's adapted by Anthony Johnston be a help or a hindrance to the screenplay written by those two legendary figures?  Well, I have to admit that while I wasn't all that aware of Johnston's work, I was very impressed that even though it was an adaptation of Moore's work and not a Moore comic book per se, he managed to keep Moore's style while at the same time putting his own spin on to it.

It is true that the first issue of the ten had slight pacing issues but that was soon polished and the story ran smoothly working it's way from twist to twist with great aplomb.  I loved how this version of the 'Beauty and the Beast' fable may have been written in the 80's by Moore and McLaren but it seemed  like it could have been from any time period.  The dystopian future that the story depicts is grimy and dark, which is in stark contrast to the bright and gaudy fashion world.

Art wise, Facundo Percio, does an absolutely amazing job of bringing the story to life.  The way Percio balances both the grittier outside world and the brash fashion world is masterful to say the least.  I especially liked the use of contrasts that run throughout the story itself.  There are scenes of absolute beauty and then shockingly dark scenes yet not once does the art feel disjointed or at odds with each other.

I have to admit that with a CV that has titles like 'Watchmen', 'V For Vendetta' and 'From Hell', this title was always going to have trouble living up to the reputation that come with titles such as those and let's be honest, it doesn't live up to those.  But is it a bad adaptation?  Far from it.  It's one of the most unique, touching and shocking titles that I have read in a very long time.  Not only does it manage to have Moore's trademark voice running through proceedings, Johnston manages to put his own spin on the title as well.

If you're a fan of Alan Moore or Malcolm McLaren then this really should be in your collection.  It's utterly brilliant, despite the slight pacing problems in the first issue, and gripping.  It's also worth picking up for some beautiful art work by Facundo Percio.