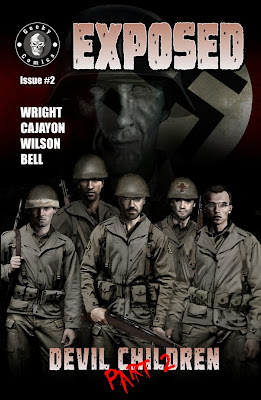 Sgt Jackson and his men stumble on a secret Nazi experimental facility, headed by Hans Shultz the crazed German scientist testing on humans, for none other than Himmler.

The brave men plan to kidnap the German leader and end the war by means of negotiation.   But instead go into battle with the new Super Soldiers just as the Devil Children emerge from within the darkness of the caves.

After the first issue of 'Exposed' I was really eager to see just where Victor Wright was going to the story next.

Well, I have to admit that it went in to a direction that I wasn't expecting and has left me itching to get my hands on issue 3 just to see what on Earth is going to be revealed next.

After a brutal attack in issue one, the group of soldiers is being thinned out at an alarming rate.  Add that on to the fact that what little luck they do have is about to run out, then the group is starting to look pretty damn well screwed royally.

The writing by Wright does a fantastic job of creating a sense of urgency for the group.  In fact, this issue really does come across as a ticking time bomb for the characters as if they truly are running out of time.  Add to that storyline, a side story about what a soldier finds when he goes home to his brothers house and you really do get to see another side of one of the characters.  The pace then picks back up and hurtles like a runaway train up to the shocking ending that leaves you wondering just what decision is going to be made.

Art wise, the feeling of claustrophobia and urgency is superbly drawn by Nino Cajayon, who uses dark and shadows so effectively that you find yourself wanting to see what is around the corner for yourself.  I especially liked the scenes between the demonic children and the super soldiers is a cinematic series of panels that absolutely revels in it's fill of violence and gore without feeling over the top or gratuitous.

All in all, this was even better than the superb first issue but that leads to one problem.  How on Earth is issue 3 going to match this one?

'Exposed Issue 2' is available to from October 5th from here!
Posted by Pat Scattergood at 12:51