Elysium: The Art of the Film By Mark Salisbury Review 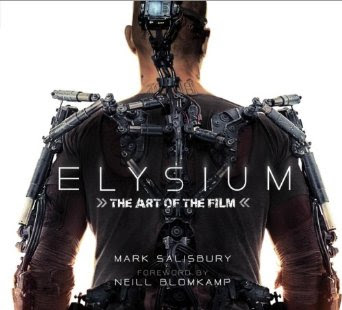 All will be revealed in Elysium: The Art of the Film, which will feature a Foreword by Blomkamp, and a wealth of stunning production art and photos, including the input of legendary designer Syd Mead (Blade Runner, Tron).

'Elysium' is the eagerly awaited film from the acclaimed director Neil Blomkamp and has a superb cast list so when I was offered the chance to review the book about the making of the movie, I couldn't turn down a chance like that.

After reading and reviewing a ton of these sorts of books, I've come to expect them to be well written and informative without battering the reader over the head with too many bits of information.  Some of them do this really well and others not so well.

This one does it very well and I have to admit that I think that this is definitely one of the best ones I've read out of all of those.

There is just so much information here yet it's presented in such a way that there isn't any chance to get bored or overloaded with it all.  It's also clearly evident from the writing that the movie is well loved by the people that made it.

The parts of the book about the casting and the special effects are by far, the best parts of the book.  I really liked the special effects part because it really showed how much effect went in to making the movie look as authentic as possible.  When they go in to detail about how they filmed the surgery scenes, it really does look massively brutal as if it's real surgery.

All in all, if you even have a passing interest in the movie then I can't recommend this higher.  It's one of the most interesting and well thought out movie tie in that I have read in a long time.  I don't want to spoil what's in the book for anyone but there really is pretty much every part of the movie making covered.

Essential for science fiction fans and most definitely for fans of the movie.