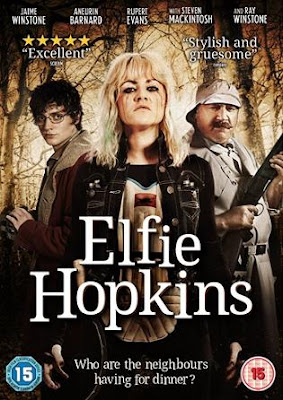 Elfie Hopkins (Jaime Winstone) is an animal-loving slacker, stoner, and wannabe detective, living in a sleepy hunting village. Haunted by the death of her mother, Elfie seeks solace from the old school detectives in The Maltese Falcon and Chinatown. She entertains herself by investigating the villagers and upsetting everyone with her imaginative allegations.

Things get serious however with the arrival of trendy city dwellers, the Gammons, who weave seductive tales of adventure and entice the villagers with offers of exotic hunting holidays around the world. Elfie smells a rat - her mundane existence is about to be blown apart.

Blood quickly starts to spill, and it's no longer just the blood of animals. Elfie discovers the villagers are disappearing and when she finally uncovers the truth, it's darker than she could ever have imagined...

I had heard some very good things about this off kilter horror with a comedic edge to it, especially from fans of movies such as 'Severance' and 'Dale and Tucker Vs Evil' so I went in to watching it with some very high hopes for being entertained.

For once, those hopes were well founded because here is a darkly comedic horror movie with some great deaths as well as laughs.  Not many movies can pull it off that well but this one does and that is most definitely down to the performances.

Jaime Winstone is the perfect fit for the stoner amateur detective Elfie Hopkins and really meshes well with her co-star Aneurin Barnard, who appears as Dylan Parker.  There's some great chemistry between the two of them and that leaves you thinking that you are watching a pair of real life friends trying to solve the case that may or may not exist.  Add in Jaimie's real life father in the shape of the mighty Ray Winstone as the village butcher, in quite a funny role, and you have a good cast,

However, there was one performance that completely made the movie for me and that was Gwyneth Keyworth as Ruby Gammon.  She manages to steal the show by giving a portrayal that manages to both be childlike and adorable while being incredibly creepy and chilling at the same time.  As a horror movie fan, I would love to see her in more roles like this one.

Now on to the deaths because let's be honest here, it's  why you watch horror movies right?  Well, we have some pretty good and bloody ones here.  Some were over quickly and others came across as quite brutal or shocking in that one minute the movie would be quiet and you were then lured in to a sense of security so to speak but then bam, death and blood.

The special features for this release are pretty good as well, the best of these being the short movie that is included.  You don't get that very often with a release so that was a good surprise for a movie fan such as myself.

I'd definitely recommend this to horror fans, especially those with a darkly comedic sensibility because this movie has that in spades.  If you liked 'Severance', 'Dale & Tucker Vs Evil' and other such movies then you will love this one.  Also keep an eye out for Ray Winstone's funny cameo as well.  I'm actually quite shocked that this has such a low rating on IMDB but I suppose not everything will entertain everybody will it?

Posted by Pat Scattergood at 14:13