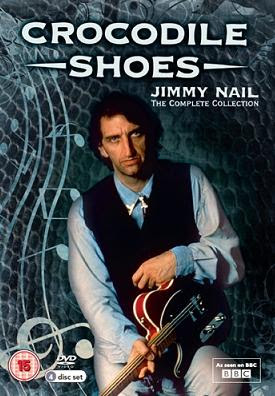 Written by and starring Jimmy Nail, Crocodile Shoes follows the life of Jed Shepperd, a Geordie factory worker who writes country music in his spare time.

With the prospect of redundancy looming, Jed makes a lifetime decision to quit his job and pursue his dream career as a country singer. From Newcastle to Nashville and back again, this is a story of fame and fortune; adventures, opportunities, conflicts, heartache, the rise, the fall.

Growing up, I got to watch this when it was shown on television.  In fact, it was one of the first television shows that I liked enough to watch each week.

'Crocodile Shoes' does a superb job of not only showing the struggle to make  it as a musician but the perils of what can happen when you're finally there.  They also do a fantastic job of showing the fall from grace as well.  While that may sound like a big cliche but the performances here take the characters and really bring them to life.

The show is most famous for launching the musical career of the main actor, Jimmy Nail, but let's not just put it down as having done that.   I think the episodes here are a great set full of intelligent writing and fantastic performances, especially that of Jimmy Nail.  Eagle eye viewers will also notice the lovely Alex Kingston, River Song in 'Doctor Who', as Caroline Carrison.

There are some parts of the show that come across as a little bit dated but not to the point of being distracting.  Like I said earlier, the performances are what this series lived on and those are very strong.

Music wise, the songs really fit the show and Nail does a great job of coming across as a novice performer who then becomes a star.  For those reasons, this show is definitely well worth picking up.

Posted by Pat Scattergood at 01:19