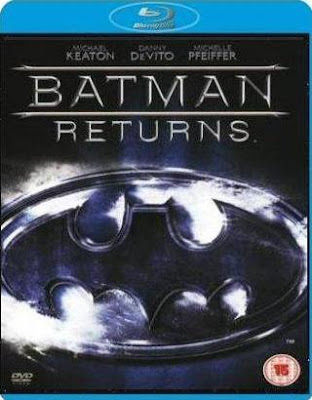 The Bat, the Cat, the Penguin

Can Batman (Michael Keaton) battle two formidable foes at once?

Like the Academy Award winning 1989 original, Batman Returns is directed by movie-making wizard Tim Burton. And like the first blockbuster, it's a dazzling adventure that leaves you breathless.

The 2nd Batman film by Tim Burton is dark, very dark, in both story and style, but to be fair with no Joker this time it was going to have a hard job so they had to do something special.

And oh my did it.

Who can forget seeing the divine Michelle Pfieffer in that Catwoman suit for the first time (rumoured to have been vacuumed sealed into it before each take)?

Plus excellent support from Danny DeVito as a very scary Penguin ( miles away from any of the TV / comic book interpretations and better for it) plus a terrifying Christopher Walken (I'm not sure he's real you know,  way too scary) as Max Shrek all up against a once again under used Batman make this one not too miss.

Michael Keaton thankfully returns as Batman (thanks to a huge pay hike) but we still get a woefully miscast Pat Hingle as Commissioner Gordon and Michael Gough tries his best as Alfred.

So a great cast and a great story make a worthy sequel, but my is it dark.  One plot line has the Penguin planning to murder loads of children by drowning in industrial waste!

Basically Batman fights Catwoman while Bruce Wayne falls for Selina Kyle and the Penguin turns up to ruin everything.  All of this while Max Shrek stirs from the sidelines would sum the film up but this is more than that.  It is another brilliant offering from Tim Burton.

Danny Elfman turns in yet another magnificent score and thankfully no Prince this time.

All in all this film is as good as the first, and deserves your time.