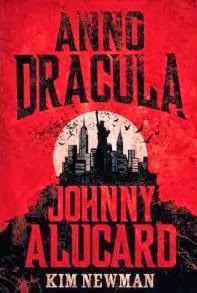 This brand new novel in the 'Anno Dracula' series, 'Johnny Alucard' takes the story to the United States and Andy Warhol's New York and Orson Welles' Hollywood.  It's 1976 and vampire reporter Kate Reed is on the set of Francis Ford Coppola's 'Dracula'.

She helps a young vampire boy, Ion Popescu, who then leaves Transylvania for America.  In the States, Popescu becomes Johnny Pop and attaches himself to Andy Warhol, inventing a new drug which confers vampire powers on it's users...

As a Kim Newman fan that was a little disappointed with the quite hit and miss nature of the third entry in this series, 'Dracula Cha Cha Cha',, I was a bit hesitant to get too excited about this, the fourth entry.

While it was a vast improvement on that one, I still couldn't help but feel like I was missing something.  I've now read all four books in the 'Anno Dracula' series and yet I still felt like I'd missed an important bit of information.

The alternative history of the world that the 'Anno Dracula' series has given us, is extremely cleverly done and that's thanks to the intelligent writing by Newman yet, like I said before, something just feels like it is missing.  That's a real shame because I really enjoyed this book for the most part.

There were some absolutely inspired moments during the story.  I must admit, I loved the idea of one of the characters meeting with Andy Warhol and seeing what would happen in this alternative timeline.  Also the idea of a drug that confers the power of a vampire on to the users and then the aftermath of taking such a drug was well handled.  It's true that it was a little heavy handed in places but I thought that it was one of the strongest parts of the story itself.

As for the rest of the book, I really enjoyed it.  Part of the fun of reading a Kim Newman book is trying to find all the references and pop culture nods that he peppers throughout the novel.  I have always liked how some of them are really out in the open and others, you have to know what you are looking for.

There is also an incredibly touching moment in the book featuring an aged yet unnamed Philip Marlowe that works superbly well and even though it's little more than a guest appearance, it underpins the rest of the story.

If you are an 'Anno Dracula' or Kim Newman fan then whatever score I give this book is going to be moot because you will no doubt have gotten this entry in to the series already.  However, if you're not and you are looking for something a little different to try out then you could do a hell of a lot worse than this.  It's a big improvement on the previous book and is jam packed full of great references and cameo appearances as well as a hell of a lot more.