An Interview With Ken Kristensen and M.K. Perker, Creators of 'Todd, The Ugliest Kid on Earth' 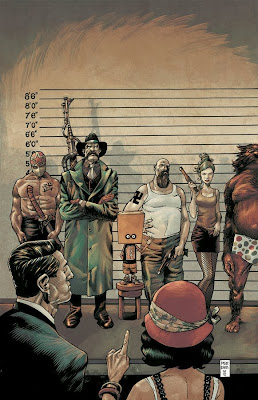 Ken Kristensen and M.K. Perker popped in to COASM recently to talk about their series 'Todd, The Ugliest Kid on Earth' to Patrick Challis so strap yourselves in to see just how one of the most unique characters in the comics world was created.

PC:  How did the character of Todd come about and what inspired you to write the story?

KK: The story behind the story starts with my meeting MK Perker. His wife, Asli, was the manager of the coffee shop I used to write in. She’s a successful novelist and screenwriter now, so this is going back a few years. At the time I was in film school and I would write in this coffee joint every day. She came up to me and asked what I was working on – I told her about film school and she asked if I needed a storyboard artist for any of my student films. I said, hell and yes! And she arranged for me to have coffee with her husband. And she didn’t tell me anything about his artistic experience, so I assumed he would be some struggling kid. But he shows up with his portfolio and it’s filled with work that he’s had published in the New York Times. Even today he still does illustrations for the Times. So from that point on I’m walking into class with storyboards that look like comic books. I mean, MK would color the storyboards! Amazing. After a few films we realized we wanted to work together in a more permanent capacity, so we started a little company and went out to San Diego Comic Con to meet some publishers. We pitched a series called Promised Murders and that got some attention – it was good enough to get Dark Horse to hire us to do an issue of Michael Chabon’s The Amazing Adventures of The Escapist. Which was a huge thrill for us, because we are big Chabon fans and we got to have lunch with him and he was pretty hands on in that he had approval over the script. That was our first comics job together.

So a few months later I’m working for Todd Solondz, the great writer-director. And MK was a big fan of Solondz. So I invite MK to the movie set to meet Todd. And things didn’t go so well. Solondz pissed MK off and the next day MK drew this picture of a kid with a bag on his head and underneath he wrote “Todd, the ugliest kid in America” or something. And I immediately responded to the look of the character but we had no personality for this little bag-headed dude and we had no idea what his story was. That’s when my nephew came along. My 4-year old nephew came to visit me in New York City and he’s the sweetest kid in the world. I put him on my shoulders as we were walking through Times Square and I hear him say, “hey, that man fell over and spilled cranberry juice all over himself.” And I look over and there’s a man lying in the gutter covered in blood. And nearby is an empty bottle of cranberry juice. My nephew just put those two bits of ugliness together in the most beautiful innocent way – right then I knew THAT was that heart of Todd. From there, we just started building the ugly world around this kid.

PC:  Ken, you have a very distinctive writing style, were there any authors that inspired you to be a writer?

KK:  J.M. DeMatteis and Keith Giffen were the guys who really did it for me in comics when I was growing up. I’m so glad they’re doing LarFleeze at DC right now. I love and aspire to DeMatteis’s range – look at his work on Moonshadow and compare it to his run on Justice League International. It was comic books that made me aware that writing was an actual career. My first published words were in a letter column in the back of an issue of Firestorm. I wrote a ton of letters to comics when I was a kid and it thrilled me when they’d write me back or publish my letter. That said, when I decided I wanted to be a writer, and I really started studying writing, I was probably most inspired by Raymond Carver. All the minimalists, but Carver especially. He wrote with such power and confidence – he knew he didn’t have to explain much. He trusted his audience. And later I discovered Neil LaBute and the aforementioned Todd Solondz. Those guys have had a profound impact on me, along with dozens of other writers.

PC:  Mr Perker, your style of drawing really brings the story to life.  What made you want to become an artist?

MK: I grew up in a very dangerous neighborhood in Istanbul, surrounded with thugs, thieves and all kinds of criminals and soon-to-be criminals. I was always drawing, reading and into movies and I was the only one who was like that among my friends. I had a huge collection of Russian classics. One of my friends had one leg shorter than the other -- and he was pumping iron all the time because he wanted to be strong and move up in the gang world. And because he had one leg shorter than the other he had problems keeping his balance while he was weight lifting. So one day I gave him my copy of War and Peace to put under his short leg so he could keep his balance.  This was a very naive act on my part, but these tough guys accepted me for who I was. I kept reading books and became a professional comic book artist at the age of 16 and that friend of mine with the short leg is in prison today. Many of my childhood friends either died or went to prison. I later came to realize that the only thing that saved me was the world I was living in -- the fantasy world in my head. I was not in the same world with them. Just like Todd.

PC:  The art work works really well with the writing.  Was it always going to be the two of you working together?

KK: We decided early on – almost ten years ago – that we wanted to work together in a more permanent way. So we started this little company and we’ve managed to make it work. We have an endless amount of stories we want to tell together. And MK can’t possibly draw them all, so we are developing projects with other artists and looking for new artists to bring into the business.

PC:  If you had to describe ‘Todd, The Ugliest Kid on Earth’ to someone in 40 words or less how would you do it?

KK: It’s a politically incorrect absurdist comedy following the adventures of the most dysfunctional family in America. I always say, if you like Shakespeare you’ll like TODD – dumb cops, scientologists, serial killers, Neo Nazis, and Charlie Rose. See, like Shakespeare. Snap.

PC:  How does ‘Todd’ compare to your past work?

MK: From an art style, it’s completely different from Air or Cairo. I try to bring a different style to every book, depending on the needs of the story.

KK: And from a story point of view, it’s different from anything we’ve ever done. But, that said, every project we’ve done has some dark humor. The first thing we ever worked on was a film I wrote about an elementary school in New Jersey who admits a new student who turns out to be the reincarnation of Adolph Hitler. MK was the production designer on that film and it was his job to draw swastikas on the faces of all these ten year old kids.

MK: That was fun.

PC:  Where do you see the character going next?

Ken: Well, if you look at the cover of issue #7 --- which is on the Previews website – you will see Todd meets up with Satan.

MK: Right. I like to say Todd is going south for the winter.

PC:  Danny Trejo is a fan of the ‘Todd’ comics and even has a character based on him.  Do you know of any other famous fans?

KK: Danny has been a big fan, and we’re hoping Todd gets a mention in the new Machete kills movie! We’ll see.

MK: Danny has been wanting to expand his comedy resume, so maybe we’ll get him in the TODD TV show.

KK: As far as other famous fans – I met Grant Morrison at a party this summer and he said he was a fan.

PC:  If either of you could do another character based on a celebrity for the title, who would you choose to include?

KK: Well, with issue #5 you will see a few celebrities because in that issue Todd goes to comic-con.

MK: And Charlie Rose is on the cover -- we have a great time parodying the people we love.

PC:  What projects have you got coming up next?

KK: We’ve got two projects at Image that will be announced soon. Both in the crime genre. And another graphic novel that we haven’t taken to a publisher yet – it’s going to be our take on the post apocalyptic genre.

MK: And we pitched a couple other animated TV shows recently, so there’s a lot going on right now.

'Todd, The Ugliest Kid on Earth: Volume 1' is available to buy now from all good retailers!
Posted by Pat Scattergood at 23:48