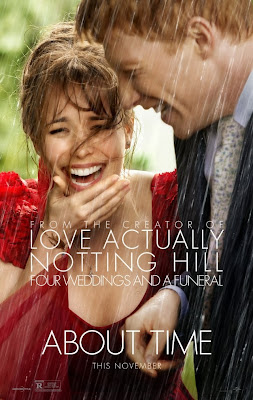 Written and Directed By Richard Curtis

At the age of 21, Tim discovers he can travel in time and change what happens and has happened in his own life.

His decision to make his world a better place by getting a girlfriend turns out not to be as easy as you might think.

As a massive Richard Curtis fan, I was massively eager to get to see this.  One of the main selling points for me was not only the interesting story but also the addition of Rachel McAdams, a criminally under rated actress, and the always wonderful Bill Nighy.

After coming home from seeing it at the cinema, I have to admit one thing.  Richard Curtis definitely has another major success on his hands.

Known as the creator of movies such as 'Notting Hill', 'Love Actually' and even 'Four Weddings and a Funeral' as well as many other television shows, 'About Time' had a hell of a reputation to live up to but did it manage it?

Well, in all honesty, yes it did.  In fact, it surpassed some of my hopes for the movie itself.  The idea of someone being able to time travel to fix his mistakes may not be the most original one in the world but they have written it so well that it works superbly.   There are some brilliant questions raised about when you should change something or if something truly needs to happen to make you in the person you have to be.  The way the movie answers some of those questions is both touching and heart wrenching at the same time but never melodramatic.

If you have seen any other movies made by Richard Curtis then you will know to expect well written characters, a heartfelt story and some absolutely hilarious moments of comedy.  That is exactly what you get here but the cast makes the movie a lot more than just the sum of it's parts.

The cast is chock full with superb performances but it really is down to three people that owned the movie for me.  Domhnall Gleeson as Tim was absolutely fantastic.  He had the right mix of being a bit dopy, a bit clumsy and being the smart lead that the movie wanted and that plays off really well against the character of Mary, played by Rachel McAdams.  She gives a joy, almost a childlike innocence, to the character and even gives the movie some of it's funniest moments.

However it's definitely one man who completely made the film for me and that was Bill Nighy as Dad.  His character jumped from hysterically funny to heartbreaking throughout the movie and I couldn't take my eyes off of him whenever he was on the screen.  His relationship with Tim  is wonderfully written and gave the movie it's emotional depth as well as a lot of the funniest moments as well.  That said, he also gives the movie one of it's most beautiful yet heartbreaking moments too.

With the massively intelligent, heartfelt and touching writing that Curtis is known for as well as some truly beautiful scenes and hysterical humor, this movie is definitely one to get out there and see.  Despite the list of movies that Curtis has made being so strong, I would say 'About Time' is up there with his best.