Where The Witches Lurk Issue 3 Review 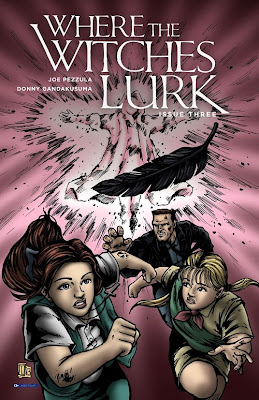 After Gina and Tina get over confident and attempt to battle a much more powerful witch resulting in the disappearance of their father, a darkness begins to rise and threatens to envelope them all.

After really enjoying the first two issues of this title, written by Joe Pezzula, I seriously couldn't wait to jump in to the third issue to see where the story was going to be taken next.

Boy, it was definitely worth the wait.  Here Pezzula has once again crafted a well paced,, exciting and twist filled tale that is really coming together brilliantly.  I've always been a fan of Pezzula's style of writing because he seems to have the knack of dropping new characters and twists in at just the right time.  Here we are introduced to a lady called Sarah, who has links to the girls father.  Just enough of the character was revealed to grab my interest and I'm sure that there is going to be much more to come from her yet here she plays a very important part in the story and answers some of the questions stemming from the first two issues.

Another strong point of the story is that Gina appears to be the more powerful of the two twins and her power is  shown here brilliantly.  I'm not sure how that will affect the relationship between the two girls but I liked how Pezzula showed that without making a massive deal of it.

Once again, art duties are handled by Donny Gandakusuma and his unique art style really works with the quick fire writing style of the story.  Like I have said in previous reviews of this title, Gandakusuma really has a talent for being able to draw panels that really hook in to the feeling of dread and darkness running through out the story.  It's true that his style may not be as clean cut as you see in the Marvel or DC titles but I've always thought of that as it being one of their  failings due to it making some of their comics look too clinical.  Here, the art looks dark and rough sometimes and that gives it a bit of an 80's horror film that gives the title quite a unique look to it.

All in all, this was a superb third issue for this title and it's one that really deserves to be read by more people.  You have great art, a new character who has a link with the twins father, a show of power from the twins and the villain and a great ending that makes you want to run out and grab issue 4 as soon as it comes out.  What more could you want?