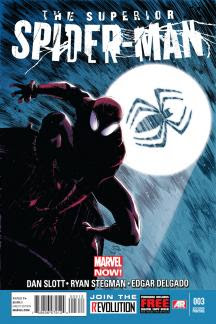 Is Spider-Man in cahoots with J. Jonah Jameson?

Has Carlie Cooper figured out the Superior Spider-Man's secret identity?

All this and the return of the villainous Vulture!

Dan Slott.  A man that has massively divided not only Spider-Man fans with his controversial stories but also readers of Marvel comic books in general.  The best way to describe his writing is that you either love it or you hate it.  There doesn't appear to be a middle ground.

So, with that in mind I decided I would jump in to some of his 'Superior Spider-Man' stories by reading the issue that marked the return of 'The Vulture' as well as the ongoing Doc Ock in Spider-Man's body story line.

It's a bit of a tough issue to review actually considering all of the backlash behind it.  Yet after all that, I went in to the issue with a still pretty open mind about it and you know what?  It wasn't nearly as bad as the fans out there made it sound.  In fact, while I think the storyline is a little bit weird, I actually really enjoyed the new take on the character.

There are some shocking moments in the story as well that I wasn't expecting, which felt nice as a long time Spider-Man fan.  I'm not really sure if I am taken with the new idea of Doc Ock being in Spider-Man's body but it's a new take on the character and I applaud Dan Slott for trying to make the character that was getting a bit stale in a new direction.  It's a brave move and one that I'm hoping they won't do a big reset at the end of the story like Marvel has been known to do whenever they do something shocking.

Art wise, I loved the dark and quite grimy feel of the story.  A few of  the newer Marvel titles seem to have a bit of a clean and clinical feel to them so it made a nice change for a Marvel comic to go in a different direction art wise.

I can see why this new take on the 'Superior Spider-Man' comic divided the fans yet at the same time, I actually really enjoyed it and found it really interesting so that's what I have based my marking on.