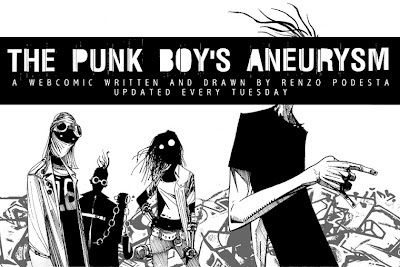 A masked boy and his band of misfits fight to survive in a world not all that far removed from our own.  Full of violence and decadence, each day alive is guaranteed to be an extra battle.  As bodies pile up and fists are thrown, just who is going to survive?

I have to admit that this web comic is one of the most unique and exciting that I have seen in a very long time.  In fact, it runs just like a web comic version of 'A Clockwork Orange' yet with a spin that makes it most definitely Renzo Podesta's own style.

There's not really a lot that I can say about the story itself because it could spoil it but there's a real feel of 'A Clockwork Orange' meets a bit of Manga style artwork and story telling.

The stark black and white artwork makes the action and the scenes really fly off the screen at the reader, hooking them in from the very moment you see it.  It looks like some of the best Manga releases that I've read and yet at the same time it felt like something completely new.  One of the things that I noticed the most was the eclectic placing of the panels.  It really came across as a shock to the system visually and that is a breath of fresh air in the comics world.  I really wish this title finds the way to break out from the Internet and become a full on graphic novel or comic book series.  I can also see it maybe even becoming a movie or an animation.

At the moment the story is released weekly and broken down in to various chapters and that gives it an old school serial feel to proceedings.  The English version is translated by Javier Gomez and it really reads well thanks to the fast pacing of the action and the dialogue.

This is definitely one of the best titles I've seen in a long time, not only as a web comic but as a comic release full stop and is well worth checking out.

You can check out the various chapters of 'The Punk Boy's Aneurysm' here!
Posted by Pat Scattergood at 06:27