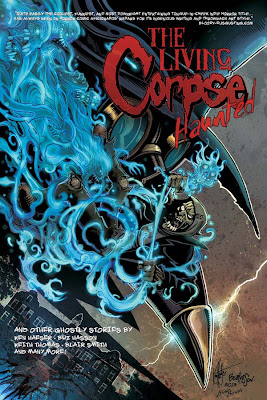 Edgar Allan: The King and I
Written By Keith Thomas
Art By Blair Smith

All Lettering By Ken Haeser

A one shot comic inspired by animated movie 'Amazing Adventures of the Living Corpse' that was brought to us by Shoreline Entertainment and Anchor Bay.

In this release The Living Corpse has to fight through an abandoned mental hospital, pitting his fists and his wits against some feeble minded ghosts while he tries to unlock the secrets behind a Doctor haunting  the place.

Then we have a certain author named Edgar Allan meeting the legendary Stephen King.

Then finally but not least, The Living Corpse meets a suicidal Mumbles the Clown in a graveyard!

I'm going to be completely honest with you guys here.  Before I read this one shot comic book by Dynamite Entertainment, I hadn't actually heard of the character of The Living Corpse.  However, after reading this, I most definitely want to see more.

The three stories here are superb.  If you like the short of sarcastic and cynical humor that Mike Mignola puts in the 'Hellboy' comics then you will absolutely love this one.  But let's talk about them one by one.

'Haunted' reads a little bit like a 'Hellboy' story but with a zombie instead of Hellboy.  Obviously.  Hell, the character even comments on the fact that while he is known as The Living Corpse, he is actually a zombie.  I loved the bitter, cynical humor that ran through this tale.  While at times it was similar in style and tone to how Mignola writes, the story itself more than stands up on it's own two feet.  As my introduction to the character itself, it worked superbly well, especially when coupled with the fantastic art.

'Edgar Allan: The King and I' sees Edgar Allan Poe meeting Stephen King, who has come to a motel style building to write his new book.  After accidentally killing a cat by throwing one of his books at it, King is haunted by Edgar Allan playing  all sorts of messed up tricks on him with the dead cats corpse.  I don't know if it means I'm wrong in the head or not but this one had me in tears of laughter.  The simpler style of art here when timed with the hilarious visuals and writing definitely made this my favorite of the three tales.

All in all this is an insanely funny and well written one shot release from Dynamite Entertainment that has not only whetted my appetite for one new character but two.  Well played Dynamite, well played.