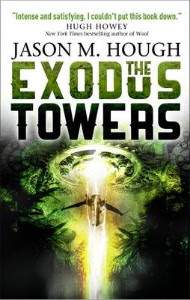 The sudden appearance of a second space elevator in Brazil only deepens the mystery about the aliens who provided it: the Builders.

Scavenger crew captain Skyler Luiken and brilliant scientist Dr. Tania Sharma have formed a colony around the new Elevator’s base, utilizing mobile towers to protect humans from the Builders’ plague. But they are soon under attack from a roving band of plague-immune soldiers.

Cut off from the colony, Skyler must wage a one-man war against the new threat as well as murderous subhumans and thugs from Darwin—all while trying to solve the puzzle of the Builders’ master plan . . . before it’s too late for the last vestiges of humanity.

While I was a fan of the first book in this series, named the 'The Darwin Elevator', I felt that it wasn't as good as it could have been.  A bit like the author had missed an opportunity to make a good book great.

This, the second book in the series, is much better.  The characters are fully rounded out in this installment and some new ones are added.  One of the complaints I had about the main villain, a man named Russell Blackfield, was that he just came across as someone with a bad attitude instead of feeling like a threat despite all the things he did in the story.  That changes here.  He's full on bad ass and that really makes the story crack along at a much better rate.  However, Blackfield meets his match in the form of a character named Gabriel and that gives the story a great and evil feel to it.

The story itself is a bit confusing if you haven't read the first book as it takes over from where the first one left off.  The settlers have made their camp and are just trying to survive despite the interference from Blackfield yet they are suddenly attack by an army of 'immunes' and all Hell literally breaks loose.

In this book, the pacing is much better, albeit with a slight flaw.  In a  trilogy you always seem to  find that there are a couple of points in the second book that drag slightly and that's the case here.  Despite that, the momentum more than picks up in the final third of the book leading to a massively exciting cliffhanger that has me eager to get my hands on the third and final book.

The one problem I had with the story is that too many bad things happened to the 'good guys' in the story.  I get where Hough was going with that train of thought, he wanted to make it seem massively hard for them to survive but with so many bad and evil things happening to them, you kind of got a bit numb or it by the end of the novel.  It just kind of bugged me that it was bad thing after bad thing constantly without room to breathe.

All in all, this is a much better paced and well rounded addition to the series with a superb ending so I do recommend it higher than the first book in the series.  However, I would suggest reading the first book before this one because there will be quite a few places that you will be lost in if you don't.

Well worth picking up, especially for the ending.

Posted by Pat Scattergood at 23:53