Survival of the Dead DVD Review 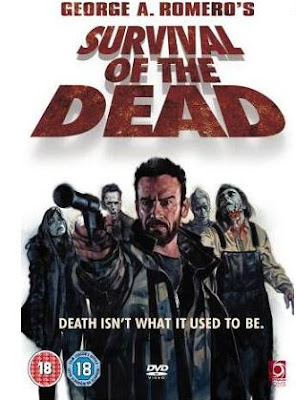 Written and Directed By George A. Romero

The master filmmaker George A. Romero continues to reinvent the modern horror genre with a zombie film that draws new battle lines between the living and the dead.

It's been less than a week since the dead began to walk, and the world has gone to hell. The rule of law is disintegrating. The military is in chaos. A war-weary band of soldiers goes AWOL, convinced they'll be better off on their own. Led by Sarge, a tough, chain-smoking guardsman, their only ambition is to survive. They are lured to a remote island that promises to be the last paradise on earth, only to discover that even here, miles away from civilization, there is no escape from a world at war. The battle that follows overtakes everyone on the island, living and dead, and poses a new meaning for the word, "survival".

Told with Romero's iconic sense of humour and keen eye for the fault-lines in contemporary culture, George A. Romero's Survival of the Dead expands and intensifies the zombie universe for which he is celebrated.

George A. Romero.  A man celebrated the world over for being one of the visionaries of the zombie genre thanks to movies such as 'Night of the Living Dead' and others.

When I saw this movie cheaply, I figured let's give it a shot.  I mean hell, it's  George A. Romero so it's going to at least be good right?

After watching this movie, I've since come to one glaring conclusion.  Romero really needs to step down from the directing and the writing.  There were so many things wrong with this movie that I honestly wouldn't know where to begin.

Firstly, it was really hard to get through the entire movie.  The writing was substandard, the acting was atrocious in places and boring in others and the zombies were treated as an after thought for most of the movie. Instead Romero focuses on a feud between two Irish families that couldn't feel more stereotypical if he tried.  That makes the movie come across as more of an Irish Western movie with the zombies just shuffling around almost by accident.

Secondly, a lot of the deaths are hilariously funny.  I'm not sure if that was the point of them but that's exactly how it came across.  Just look at the death on the boat involving a fire extinguisher.  A lot of the deaths bordered on the rediculous and actually took the viewer out of the movie itself.  Also there was a scene where a zombie gets up and gets on to a horse!  That had me howling with laughter, although I'm pretty sure that wasn't the reaction Romero would have wanted.

All in all, this is a movie that is definitely not worth picking up.  In fact, it's one of the worst zombie movies I have seen in a while and considering that it's a Romero one, that's a real shame.

Posted by Pat Scattergood at 14:04