Sherlock Holmes: The Stuff of Nightmares By James Lovegrove Review 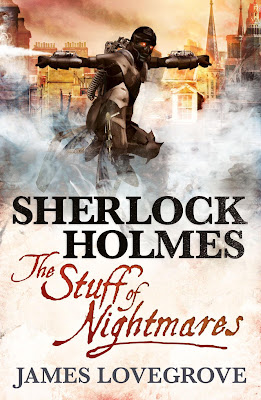 It's the autumn of 1890, and a spate of bombings has hit London.

The newspapers are full of fevered speculation about anarchists, anti-monarchists and Fenians. But one man suspects an even more sinister hand behind the violence.  Sherlock Holmes believes Professor Moriarty is orchestrating a nationwide campaign of terror, but to what end?

At the same time, a bizarrely garbed figure has been spotted on the rooftops and in the grimy back alleys of the capital.  He moves with the extraordinary agility of a latter-day Spring-heeled Jack.  He possesses weaponry and armour of unprecedented sophistication.  He is known only by the name Baron Cauchemar, and he appears to be a scourge of crime and villainy. But is this masked man truly the force for good that he seems?  Is he connected somehow to the bombings?

Holmes and his faithful companion Dr. Watson are about to embark on one of their strangest and most exhilarating adventures yet.

As a massive Sherlock Holmes fan, I will pretty much pick up any story featuring the famous detective and his equally as famous companion.  Titan Books have done a great job of creating new and exciting books and still managing to keep the charm of the originals so when I heard James Lovegrove had done one for them, I was hooked in.

But let's get one thing clear that bugs me straight from the outset about this book.  It's the cover.  It looks so badly and sloppily done that it comes across as an amateur illustration that someone has knocked up over their lunch break.  Oh well, let's not judge a book by it's cover however.

Here, Lovegrove has crafted a cracking story that really keeps the charm of the Doyle stories but with one glaring flaw.  The momentum will just be picking up and then all of a sudden it will stop for Watson to explain things.  Sometimes that works and other times it left me wanting to scream because I just wanted to see what was going to happen next to the characters.

However, when the action does get going it really explodes off of the page if you can excuse the really bad pun.  The sharp and fast pace of those moments really show what Lovegrove can do but the character of Watson and the character of the Baron seem to paint him in to the corner.  I do appreciate that he was trying to make each voice completely separate yet when a character deems it appropriate to give an elaborate back story or an explanation, it just feels like he's trying too hard to cram everything in and  that's a shame.

Doyle, when he does the same, manages to do it with a bit of flair and manages to hook it in to the story so that proceedings don't come to a grinding halt.

That said, I did enjoy the fact that, at times, it was hard to known whether or not the Baron was a good character or a villain.  In fact, the twists that came with this character made me want to turn page after page despite the flaw that I mentioned earlier.

All in all, while not as good as the other Sherlock Holmes books that Titan Books have put out recently, it's still head and shoulders over the two Guy Ritchie movies and well worth a look.  Just a pity about the awful cover.