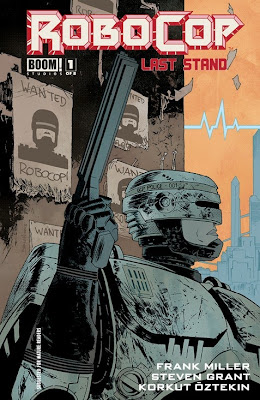 Frank Miller’s incredible screenplay has been brought to life in this hard-hitting Steven Grant (2 GUNS, PUNISHER: CIRCLE OF BLOOD) penned adaptation. With all the brains, guts, and bullets that made the first film an instant classic, this is a comic event not to miss.

The police force has disbanded. The people of Detroit have been evicted from their homes. ED-209’s and OCP officers run the streets. With OCP’s vision for Delta City well underway, Robocop may be his city’s last hope.

This is Robocop’s last stand, as it was always intended to be.

As a big 'Robocop' fan I was  massively eager to get hold of the 'The Last Stand' series of comic books when I heard that Boom! Studios were going to put out.

Then I got my hands on a copy of the first issue of the five issue run and I have to admit that I came away feeling quite disappointed by it.

The story itself is well written and moves along at a cracking pace.  There are some great nods to the past 'Robocop'  stories yet it's done in such a way that a newcomer to the series won't feel lost at all.  The  writing also makes the character of 'Robocop' himself a quite sympathetic character without taking away the rough and tough edge that makes the character so enduring.

Another thing about the writing I liked was the feeling that there is something major on the way.  A bit like a feeling of dread.  I really liked that atmosphere and feel that it added to the story itself.  However, I don't know why but despite all those good things, there just felt like there was something missing that I couldn't quite put my finger on.

Art wise, I was massively disappointed with what was on offer here.  The art itself felt like rush fan art instead of the dark, grimy art that was needed to make this story have the effect that the writers no doubt wanted the issue to have.  One of the things about the art that annoyed me the most were the faces.  Some of them looked absolutely soul less or the facial expressions just didn't fit what was going on in the panel at all.  It felt a bit like being at a movie and someone laughs at something when nobody else is laughing.

All in all, while the story was well written and the pacing was spot on, it just felt like something was missing.  However, that said, the story hooked me enough to want to read what is going to happen next.  That said, the art is an absolute let down.  In places it looked rushed and others it looked incredibly amateur and didn't suit the dark nature of the story at all.

Still worth picking up to see where the story is going to go next but be prepared for some really disappointing art work.