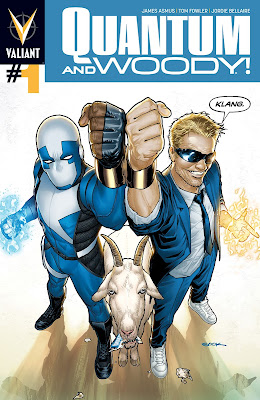 Once upon a time, Eric and Woody Henderson were inseparable. Adopted brothers. Best friends. Brilliant minds.

Years later, they are estranged siblings, petty rivals, and washed-up failures. But when their father’s murder leads them into the throes of a life-altering scientific accident, Eric and Woody will find themselves with a whole new purpose – and a perfectly legitimate reason to wear costumes and fight crime.

(And, yes, there will be a goat too. Eventually.)

Now in to it's third printing due to it's amazingly popular run with fans, I figured I would finally get around to taking a look at the adventures of the 'worst superhero team' and see just what all the fuss has been about.

I have  to admit that I am glad I did.

Here, Valiant and it's wonderful team of writers have crafted a great and funny story that is also well paced and exciting at the same time.

One of the things that I liked the most was the intelligent writing that really made these characters feel like real people.  The relationship between the two main characters is one of the funniest I have read in a comic book for a long time.  The way they bicker flows really naturally, almost as if thy really are brothers and that the bickering is part of their lives.

I also liked the fact that during the story, you get glimpses of the back stories for the various characters but without feeling over loaded by new characters.

Art wise, I really like the sharp lines and panels used in the story.  Some of the panels are positioned in such a way that the action and the dialogue truly leap off of the page.  One of the best things I've seen in the art of this issue are the facial expressions of the characters.  It's almost like watching a good actor perform.  Just a tilt of the head, a raise of an eyebrow etc are all used here to bring home exactly what is happening to life.

Personally I can definitely see what the fuss about this issue is about and it's easy to see just why it's gone on to the third printing of the title.  It's funny, exciting and extremely well paced so you guys and girls should definitely go and grab yourselves a copy.