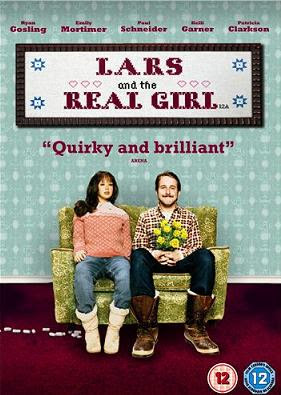 Lars And The Real Girl stars Ryan Gosling as Lars Lindstrom, a loveable introvert whose emotional baggage has kept him from fully embracing life.

After years of lonely solitude, Lars invites Bianca, a friend he met on the internet, to visit him in his home town. His family and friends are not only relieved but also excited to meet the girl who has brought Lars out of his shell! When Lars introduces Bianca to his brother Gus (Paul Schneider) and his wife Karen (Emily Mortimer) they are stunned as Bianca turns out to be a life-size doll whom Lars is treating as a real person!

After consulting with the family doctor, Lars' family and friends are instructed to along with his delusion - resulting in an emotional journey for Lars and the people around him!

Ryan Gosling has always been one of my favourite actors thanks to his subtle and easy style of literally becoming the character he is in a movie.  It's no different here.

Gosling quite literally becomes Lars Lindstrom and you just can't take your eyes off of the screen whenever he is there.  In a movie that has quite a random and strange sounding plot, Gosling plays the part completely straight in an incredibly subtle and emotional way.  You really do feel for this character that is so lonely that this is the only way for him to come out of his shell.  In fact, you end up watching the movie just wanting to give him a hug, or at least you would if the character hadn't got a fear of being touched.

However, it's not only Gosling that rules the movie here.  The supporting cast is absolutely superb and inhabit their characters to such a successful degree that you really couldn't imagine anyone else playing them.  Their reactions to what Lars is doing really make the movie the success that it is.  If they had have overplayed it or been melodramatic then this movie would have failed straight away but because they play it in such a sympathetic way, it makes the story grip you from the very beginning.

A lot of that is down to the intelligent script.  It really runs like you're really involved in the lives of the characters and you feel a certain emotional bond to them.  That's the most evident during the heart wrenching final third of the movie.  It's written and acted so well that it will break your heart or at the very least bring a tear to your eyes.

I can't recommend this movie high enough in all honesty.  It sounds like it should be a silly slap stick style comedy but instead we have a heart felt drama with some amazing performances, especially by Gosling himself.

Posted by Pat Scattergood at 07:27