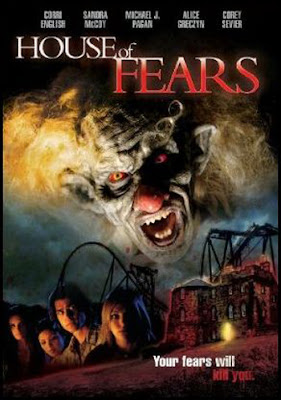 Written By Steven A. Lee and John Lyde
Directed By Ryan Little

Haunted house horror. The night before a Halloween party is scheduled to be held at a a notorious local haunted house, six teenage friends break in for a few hours of spooky escapades.

But their evening of fun quickly turns into a realisation of all their worst nightmares as they find themselves trapped inside a world of terror and carnage.

I have to admit one thing here.  I didn't really have all that many high hopes for this movie after reading some of the reviews and therefore wasn't all that eager to watch it.  When a night came around that I couldn't decide what I fancied watching, I figured I'd stick this one on.

Was it worth the time?

It's pretty much your standard 'been there, seen that' teen horror movie.  A group of teens go somewhere and get picked off one by one.  That's pretty much what you have here.  However the filmmakers here have given it at least a little twist by trying to make it stand out a little bit by making it about the teens tackling their biggest fears.  While that isn't the most original idea for a movie I've ever seen, at least they tried to put a bit of a different spin on it.

One of the things that I didn't like about the movie was actually the cast.  I was expecting a cookie cutter style cast that would tick all the boxes in the cliched column and that is exactly what we got here yet to me, none of them were really that likeable.  I didn't really care all that much about which of them, if any, would survive to the end of the movie.  That said however, I have seen a hell of a lot of horror movies and this isn't the worst set of performances I've seen.

One of the things that I did actually like were the deaths.  It's true that some of them are kind of hokey but they're a lot better than some others I have seen while doing this blog.  We have killer clowns (I bloody hate clowns), a scarecrow (yes really) and much more.  I actually quite liked the scarecrow in that the costume made the scarecrow look a bit messed up and I quite liked that.

Another thing I liked was how the movie itself was filmed.  There were quite a few scenes where it has quite a dark atmosphere because it genuinely looks grimy and dirty.  There were also a few little touches here and there that added to that.

All in all, while this isn't a terrible horror movie by far, it does suffer from a problem a lot of other low to mid budget horror movies have and that's the simple fact that there isn't enough money to really make it stand out from the crowd.  There are a few inventive moments here and there but not enough to grip me as a viewer.  That said, it's still worth picking up for those moments.

Posted by Pat Scattergood at 14:39