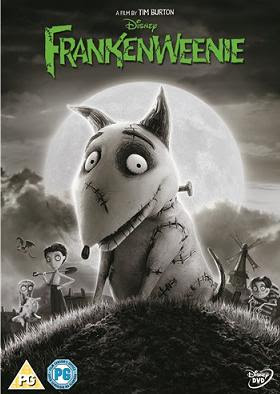 From Disney and creative genius Tim Burton (Alice in Wonderland, The Nightmare Before Christmas) comes the hilarious and offbeat Frankenweenie, a heartwarming tale about a boy and his dog.

After unexpectedly losing his beloved dog Sparky, young Victor hanesses the power of science to bring his best friend back to life - with just a few minor adjustments.

He tries to hide his home-sewn creation, but when Sparky gets out, Victor's fellow students, teachers and the entire town learn that getting a new "leash on life" can be monstrous.

Complete with electrifying bonus features, Frankenweenie is alive with enchanting fun for the whole family

As a massive Tim Burton fan, even I have to admit that I wasn't all that impressed with his last couple of movies.  Don't get me wrong, they weren't awful it's just that they didn't feel up to his normal high standards yet with this one, that completely changed.

Based on the short movie from 1984, which can be found on the special edition version of 'The Nightmare Before Christmas', this remake not only does the original justice, it surpasses it big time.

Burton always has been a master of making the weirdest things just seem incredibly normal and beautiful despite the happenings on the screen being completely off kilter and sometimes even skewed.  It's exactly the same here.  The idea of bringing a dead family pet would be a completely rediculous idea in other hands but when it comes from the mind of Tim Burton, it's beautiful, touching and hilarious in equal parts.  One of the fun parts of the movie is trying to find all the classic horror movie references that the guys have managed to sneak in to the movie.

Cast wise, we're absolutely spoiled for choice with the performances here.  I've never been that big a fan of Martin Short but here he pulls triple duty as three separate characters and performs them so well I didn't realise it was him doing all three.  He's not the only one that gives the movie it's heart either.  That goes to Charlie Tahan as Victor.  Tahan really makes the character of Victor the emotional core of the movie without letting the character be too sentimental or cloying.

The only part of this release that disappointed  me at all were the special features.  What we have are good for what they are but I suppose I was just expecting a little bit more from the release itself but to me, that's a minor flaw when the movie really is this good.

If you are a Tim Burton fan then you will absolutely fall in love with this movie like I have.  If you're not a Burton fan, don't let that put you off.  This is a superbly animated movie with some real and intelligent emotional depth that is written in such a way that not only will the little ones like it but so will the parents.  Well worth picking up.

Posted by Pat Scattergood at 10:59