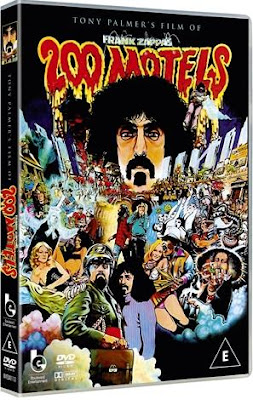 This is one of those movies that is incredibly hard to classify and/or review if I am completely honest.  It is most definitely a subject of it's time as well as being mind bending to say the least.

The story, what there is of it, revolves around Frank Zappa's band going crazy in a place named Centerville and wanting to get paid.  Or at least, I think that's what it was about.

While the movie part of proceedings seemed a little too 'spaced out' for my tastes, I really enjoyed the performing footage of Zappa and the band.  I've always been quite a fan of their music in general so seeing them performing all the songs here live is a real treat.

I must admit that Tony Palmer has done an admirable job of trying to capture the zany and slightly insane personality of Zappa himself and as a whole, the movie does a good job of showing how Zappa's mind works.  However, the movie is just so insane in places that I honestly found it hard to follow what was going on at times.

The transfer is serviceable but there are a couple of the places where the picture and sound quality do suffer a little bit.  It doesn't ruin the movie or anything like that but it is a little distracting.

The best way to describe this movie is that you should go in to it with the intention of watching it for the music and not the movie itself.  The acting is all over the place and so is the story but the music here is absolutely superb if you are a Zappa fan.

Posted by Pat Scattergood at 12:18