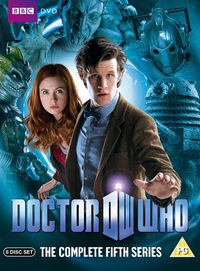 With a brand new Doctor we also get new companions in the shape of Amy and Rory but that's not all.  We get the return of some of the Doctor's oldest foes!

So all change, and not a moment too soon.  This is virtually a whole new show now and to be fair it needed a change quite badly.

After an enjoyable but over emotional ending for the tenth Doctor, Matt Smith and Steven Moffat begin this new era of Who with a bang and possibly the best story ever, but more on that later.

This season had big budget cuts but you'd never notice as it looks fantastic and I love the new Tardis prop.  There is only one real failure this season and that's the new Daleks, they are just wrong in a 'Fisher Price' toy way.  Too tall, too fat, the voices were wrong so no wonder they are used more sparingly in future stories.

The main actors are brilliant.  Matt Smith nails it from the word go and quickly became my favorite Doctor in no time at all but while Karen Gillan is great as Amy Pond, I found the character very annoying sometimes.  Her boyfriend Rory Williams (Arthur Darvill) who will later become a companion is also an excellent actor who you empathise with instantly

This episode has lots to do as it's basically a pilot for the new Who, and it delivers a fast paced story with added kissogran, whats not too like?

Victory of the Daleks

This stands out for alll the wrong reasons, a weak script with a screwed  up timeline and the most convoluted central premise ever (including Timelash)  and those terrible Dalek redesigns, but talking a bomb out of blowing up?  What was Mark Gatiss thinking?  (Considering he is tipped as next show runner his stories need to improve big time).

Vincent and the Doctor

A beautiful, touching story showing the true horror of manic depression so don't miss this one!

The Pandorica opens/ The Big Bang

What do you do when your budget has been cut to the bone for the finale to your season? Well SM turns in a brilliant script, both tense funny and scary and uses time travel in a clever way.  Excellent in every way.

This is a fantastic season with only one clunker don't miss it.

Posted by Pat Scattergood at 15:19