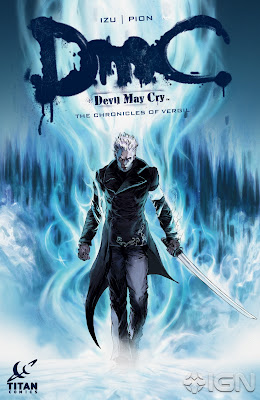 In a world controlled by demons, Dante is humanity's last remaining hope.

But Dante is lost, imprisoned far from the human world.  Accompanied by Kat, a human psychic, and nearly driven insane by his inner demon, Dante's twin brother Vergil must now attempt a rescue!

As a big fan of the 'Devil May Cry' series of games, I was really excited for the new game.  Then I found out there would be a prequel graphic novel released as well, I couldn't wait to get my hands on it and see where they were going to take the characters next.

I have to be honest, as good as the story was there just seemed to be something missing.  I don't know if that was because of the editing or the translation but there were a few moments where the story seemed to jump forward as if we missed a panel or some dialogue.

The flaw took me out of the story a couple of times and that's a real shame because the story that we have here is a superb link in to the new game.  There is some great back story for the characters and the art really brings the characters to life in a great way, especially the demons.  The art looks like it wouldn't be out of place in an animated horror movie in all honesty.

If you are a fan of the 'Devil May Cry' games then you will most definitely get a kick out of this story and there are plenty of nods and tips of the hat to the other games.  However, if you aren't a fan then you may find yourself a little lost in a couple of places.  Also, the quite abrupt nature of the book may be a bit of a turn off for people who aren't going to get the game because it does link directly to the beginning of that.