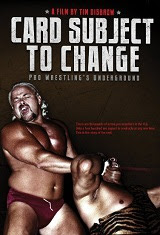 This compelling film follows several wrestlers as they make their way through the local VFW halls, high school gyms and Elks' lodges grinding it out on the independent circuit where the payouts can range from $5 - $20 per match.

Some do it for the love of the sport, others desperate to make it big; it is both heart-pounding and heart-wrenching.

Tim Disbrow makes his directorial debut as he documents the circuit's legends, including: Kevin Sullivan, Michael "Trent Acid" Verdi, Rhett Titus, Sabu, Kamala and Necro Butcher, who also made an appearance in the critically-acclaimed film, The Wrestler.

As a massive wrestling fan, I'm normally found either watching wrestling, reading about wrestling or watching documentaries about it.  Don't get me wrong, I'm not one of those fans that looks at it as a be all and end all type of thing but I just absolutely love watching all kinds of it.

'Beyond the Mat' and 'Wrestling With Shadows' are two of my favourite wrestling documentaries of all time so this one had a hell of a lot to live up to but did it do that?

The simple answer to that is a resounding yes.  In fact, not only did it live up to that but it actually surpassed those two titles.

I'm not going to lie to you however.  As interesting a documentary as this is, it's very hard to watch in places due to the circumstances surrounding some of the wrestlers themselves.  Some are guys and girls that have hit the big time in places such as WWE, TNA and ROH only for it to leave and they find themselves back in the 'small leagues' as some people think of them.  Others are young up and comers that are just starting out but there are others that are stars on the independent scene yet just haven't been able to pass that level either through bad luck, personal demons or bad decisions.

One of the things that I liked the most about this documentary was that while it does show the dark and shadowy side of wrestling, they also show the hopeful side in the shape of the guys and girls that just wrestle because they want to.  It's very well done in that you get both sides of the story without it falling in to melodrama.

Sadly, there are some tragic shadows that loom over this documentary.  The film crew followed Trent Acid as he tried to fight his demons and get his career back on track but sadly he passed away from a drugs over dose just after the film was finished.  The documentary also features Sherri Martel's last interview because she too sadly died from an overdose.  The latter end of the documentary shows Kamala and Percy Pringle (aka Paul Bearer) at an independent show together for the first time in 28 years.  Sadly, as we wrestling fans already know, Pringle sadly passed away and Kamala lost a foot to diabetes.

Let's not end on a negative note however.  One of the most interesting people in the documentary is Kevin Sullivan.  He has been to the top and he has hit the bottom at various moments in his life but he is the one that seems most at ease with where he is in life and that for me gives the documentary it's hopeful side.

If you are a wrestling fan then I honestly can recommend this high enough.  If you liked 'Beyond the Mat' and 'Wrestling With Shadows' then you just have to see this one.  It's one of the best and well thought documentaries on the risks as well as the highs of wrestling that I have had the pleasure of seeing.

Posted by Pat Scattergood at 15:12