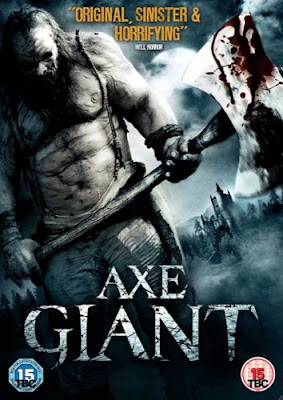 Young adults at a first-time offenders' boot camp discover the legend of the giant lumberjack Paul Bunyan is real, but is much more horrifying than they could have imagined.

A 'slasher' style movie made for the SyFy channel.  I really should have known better right?  Yet for some reason, I went in to this movie actually with some high hopes for it.  While the synopsis doesn't exciting sound exciting, I'd heard some really interesting things about the movie itself.

However, I have to admit that this is one of those movies that is so bad that it is a hell of a lot of fun to watch, even if it is just to point out the myriad of bad editing errors, people who are dead in the movie coming back as other people and so on.

In fact, I would go so far as to say that this is the definition of 'B movie' horror.  The cast are all pretty interchangeable and to be honest, there wasn't a stand out amongst any of them.  That said however, there was a hell of a lot of (unintentional) laughs at some of their performances.  My favorite being Sgt Hoke played by Thomas Downey.  He goes for every military cliche that he possibly can and does it in such a hokey, funny way that even Bruce Campbell himself would have watched and asked him to tone it down a bit.

The killer lumberjack, yes I can't believe I had to write that either, is actually a relatively sympathetic character.  Some of that is down to the facial make up that makes the character look so sad and pathetic that you can help but at least feel some sympathy for him.

Special effects wise, while there are some interesting gore effects in places of the movie, the CGI effects are awful for the most part.  They just look so out of place with the rest of the movie.  It almost looked like someone had placed them over the top of another movie to save money.  On the plus side, the scenery looked beautiful though  so there was at least that.

All in all, I can't honestly give this a good rating because it's an awful movie for the most part yet because of that, it's a lot of fun to watch in a 'so bad it's good' way.  Then again, it was a slasher movie made for the SyFy channel so what else should I have expected?

'Axe Giant: The Wrath of Paul Bunyan' is available to buy from 9th September 2013

Posted by Pat Scattergood at 14:16