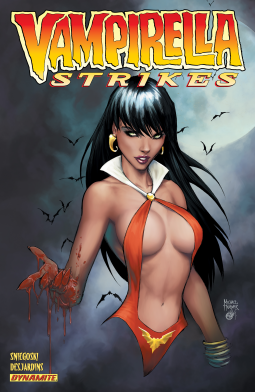 For years, the raven-haired heroine Vampirella has hunted the world’s supernatural threats, all the while fighting back her own bloodthirsty nature.

After a night out in Boston leads to particularly brutal violence, she seeks comfort in her Brownstone home… but discovers the most unexpected surprise of all.  Angels have been sent to her by God — and they come asking for help!

Enter Janus, a former soldier in the legion of Heaven, who skirts the line between the damned and divine. Only a fallen angel can navigate Vampirella through the seedy, demon-run underworld, where she hopes to find the source of an addictive, body-altering drug derived from archangel blood.

Will Vampirella’s mission redeem her… or will she uncover secrets so shocking that their discovery will damn her forever?

I have to admit that I've never really been all that excited or interested in the adventures of the scantily clad vampire named Vampirella.  In fact, I've always felt they were always a bit cliched.

However, I actually found this collection to be really well written and exciting to the point where I couldn't put it down and just had to read on to see what was going to happen next.

The storyline covered by this collection is a real humdinger.  Involving fallen angels, the fall of Heaven, children that could change the future of Heaven itself,  the chance for Vampirella to gain redemption and a whole conspiracy about the blood of an angel being mixed with the blood of a demon to create a drug.

I honestly was surprised that despite not  being all that big of a fan of the character, I was absolutely gripped by the storyline.  I still wouldn't say that I like the character massively but I went in to this collection with an open mind and I'm glad I did.  There were so many different stories running alongside the main one yet it didn't once feel cluttered or too busy.  In fact, all of the stories and the twists were handled with a deft hand.

Art wise, the story had a really  good, dark and grimy look to it and that really helped to tell the story in a superb way.  There were a couple of panels where the detail seemed a little lacking on the facial expressions but the rest of the book was very well drawn and the panels were placed in such a way that the art just flowed brilliantly.

Definitely a collection worth picking up, even if you're not a fan of the Vampirella character.  The storyline was interesting and well written plus there were quite a few twists and turns that had me gripped from start  to finish.  What more could you want from a story?

Posted by Pat Scattergood at 14:31