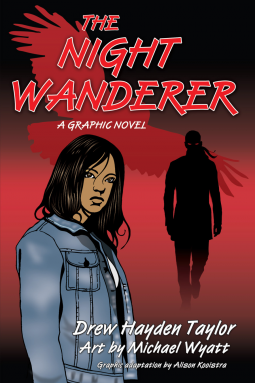 A mesmerizing blend of vampire thriller and coming-of-age story--now available as a graphic novel.

Newcomers to the Otter Lake native reserve don't go unnoticed for long. So it's no surprise that 16-year-old Tiffany's curiosity is piqued when her father rents out her room to Pierre L'Errant, a mysterious stranger.

Little does anyone suspect the truth about the newcomer. Pierre has a dreadful secret. After centuries roaming Europe as a brooding vampire, he has returned home to reclaim his Native roots before facing the rising sun and certain death.

Meanwhile, Tiffany is deeply troubled--she doubts her boyfriend is faithful, has escalating disputes with her father, and her estranged mother is starting a new life with somebody else.

Fed up, Tiffany flees into the bush, where a frightening encounter with L'Errant introduces her to her proud Native heritage. For Pierre, though, destiny is fixed at sunrise...

I was expecting an exciting vampire story with a bit of a Native twist to it, while we got an interesting take on the whole vampire story  I couldn't help but feel a bit underwhelmed by it all.

That's not to say that it's a bad graphic novel because it's not.  It just feels like something is missing.  It's kind of like reading a story then skipping  ahead a couple of pages.  It's that sort of lost 'what is going on' kind of feeling.  That's a real shame because the story does show a lot of promise and has some really interesting premises to it.  I really wanted to know more about the characters, more about the settings.  I know the saying is that less is more but in this case, adding a little bit here and there would have really helped raise the quality of the story.

However, it's the art that is the biggest disappointment.  It seems so clean and clinical that it really doesn't bring the story to life at all.  In fact, it does the complete opposite and really took me, the reader, out of the story nearly completely.  There were times where the facial expressions really didn't fit the action on the page in the slightest to the point of actually making me want to laugh at how out of place it looked.  I'm pretty sure that's not the reaction that they were going for with the art.  It would have really helped the story be more gripping if the art work was dark and grimy or even if there had been a bit more care taken with the scenes and the panels, instead what we end up with is a series of panels that look completely amateurish in places and absurd in others.

I'm not really sure if I can recommend this adaptation of the novel by Drew Hayden Taylor.  The art is cold and clinical in places and out of place in others and the writing comes over as if there are parts missing and that's a real shame because I had really high hopes for this one.

Posted by Pat Scattergood at 16:04