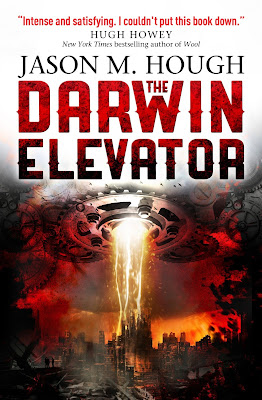 In the mid-23rd century, Darwin, Australia, stands as the last human city on Earth. The world has succumbed to an alien plague, with most of the population transformed into mindless, savage creatures. The planet’s refugees flock to Darwin, where a space elevator—created by the architects of this apocalypse, the Builders—emits a plague-suppressing aura.

Skyler Luiken has a rare immunity to the plague. Backed by an international crew of fellow “immunes,” he leads missions into the dangerous wasteland beyond the aura’s edge to find the resources Darwin needs to stave off collapse. But when the Elevator starts to malfunction, Skyler is tapped—along with the brilliant scientist, Dr. Tania Sharma—to solve the mystery of the failing alien technology and save the ragged remnants of humanity.

'The Darwin Elevator' is a hard novel to give a score to if I'm completely honest.  I absolutely loved the plot and after a bit of a slow start, really made me want to read the second book in the series.

However, there are quite a few flaws that took me out of the story on more than one occasion and that really hurt the flow of the book itself.  Hough really does show a lot of skill as a writer but with a bit of a tighter edit and maybe a slightly sharper eye on the characters, this good book could have been absolutely brilliant.

One of the problems I had with the story was with how the world was set up.  We're meant to believe that in a world where a disease has ravaged the population that the few people that are immune are at the lower end of the hierarchy of the world.  Surely that rare and special skill, or power if you want to call it that, would make you incredibly important.

Another thing that bugged me were a few of the characters.  Skyler Luiken is the captain of a team of immune people who are also scavengers yet he comes across as a bit of a wet blanket.  I know that his character is written as someone that will mock himself but instead he comes across as someone with no confidence and that really wouldn't be able to lead a team at all.  In fact the female character in the team named Samantha would have made a better leader in the story if I'm completely honest.

The villain of the book, Blackfield, is a one note villain and doesn't really come across as a threat at all.  Instead he just comes across as a bit of a douche bag with an attitude problem instead of a major bad guy that could end up ruling everything.

My favourite character, Neil Platz, was a massively interesting creation by Hough and it was when the story was being told from his POV that it really gripped me the most.  He was by far the best character in the book and I really wanted to find out more about the character.  However, his assistant Tania suffered from the same problem as Luiken in that she was wet blanket.  She may as well have been wearing a sign on her back saying kick me.  Her character came across as so gullible and easily fooled that whenever something happened to her, and it did a lot, it got to the point where I didn't really care  about her character anymore.

Now on to the good things.  There was a great atmosphere running through the book that both left me, as the reader, with a feeling of dread as well as one of excitement.  This was especially evident on the scenes with the SUB'S as they're called.  Hough did a truly fantastic job of making you feel closed in whenever there was an attack and the really made me want to turn page after page to see what was going to happen next.

Another strong point of the book was the timings of the shocks and twists.  They seemed really well timed in to get the most impact and when the book ended, I really wanted to know just what was going to happen next.  Characters that I didn't think would die ended up doing just that and characters that I thought were going to die didn't and I loved that about the book.  Just when you thought you could guess what was going to happen next in the story, Hough throws a 360 in to there and you're left wondering where he is going to take the story.

All in all, where there were quite a few flaws with the story and some of the characters, it seemed to get better as the story went on.  I'll admit that I wasn't that impressed with the choice of villain but the strength of the plot itself pushed that along nicely and has made me want to get the 2nd book despite the flaws in this one.

Posted by Pat Scattergood at 11:07