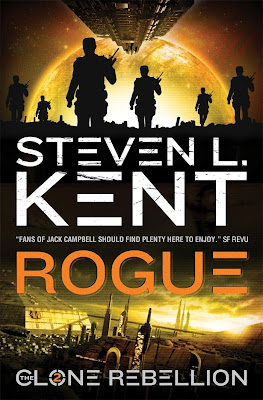 Having gone AWOL after his fellow troops were massacred, Lt. Wayson Harris-outlawed clone soldier of the Unified Authority-returns to service.

But will Harris work for his former leaders...or against them?

After having read the first book in this series, I had massively high hopes for this one because the first novel was fast paced, exciting and had some great twists during the story.

Did this, the second installment in the series,  have the same effect?

Steven L. Kent's books are always rather entertaining.  They're the literary version of a big budget summer blockbuster at the cinema and the pacing reflects that brilliantly.  There's not a whole lot of time for the reader to breathe, instead his writing focuses on the action and on the decisions that Harris, the main character, has to make.

However that leads to a couple of slight flaws in the story.  One of the things that I noticed is that a big deal is made of Harris' skills as a 'Liberator' clone yet on a lot of the action set pieces he seems to be on the outside looking in and not really getting all that involved.  I found that a little bit strange.  One of the other things that bugged me a little was the fact that when Harris would go to meet his partner, Kent would describe how big he was.  Personally I think the reader would have understood just how big the guy is on the first time of being told so I found that little bit bugged me slightly.

Other than that, this is a very good science fiction book that's very fast paced and has some very exciting moments that will keep the science fiction fans out there on the edge of their seats.  One of the things I really did like was the simple fact that Harris wasn't perfect.  He got things completely wrong, he made really dumb decisions sometimes during the story and there were even moments that you thought he wasn't going to make it through alive.  All too often in these sorts of stories you always know that the hero will make it through no matter what the writer throws at him or her.

While I didn't enjoy this as much as the first book in the series, this is still a very good one to pick up.  If you love fast paced science fiction that's packed to the rim with action then you'll definitely want to grab this one.  I'm very much looking forward to getting my hands on the third book in the series.

Posted by Pat Scattergood at 07:20