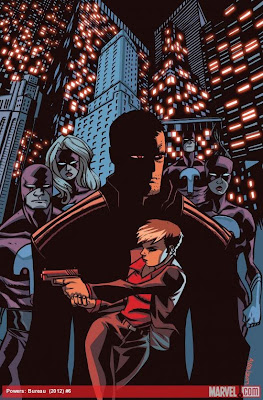 With Walker trapped and Pilgrim pregnant, the case rumbles on but are we any closer to cracking the case?

After a slightly disappointing 5th issue I was hoping that the momentum would pick back  up with this, the 6th issue.

Well, while it manages to get some momentum going again with some superb set pieces but the ending stops all of that dead in it's tracks.

The writing of the story is much improved than the last issue and the pace really picks up for the first 3/4 of the comic yet it has such an abrupt ending and there are so many questions that you're left scratching your head.  That feeling is made a bit worse by the fact that issue 7 will start a new storyline entirely but I'm hoping that the loose ends will be picked back up at some point in that issue because there are many unresolved questions left here.  I know that the ending is left relatively open ended to create a bit of tension and excitement for the next issue but like I said earlier, it just left me scratching my head instead of doing that and that's a real shame considering how good the first found issues were.

However the art work is superb as always.  Michael Avon Oeming always has a knack for bringing characters to life and that's no different here.  He makes fantastic use of the settings and of making interrogation scenes really feel claustrophobic but he also makes the action scenes jump off of the page and really catch the eye.

I have to admit I was really enjoying this issue but the ending being so abrupt just felt quite out of place and took me out of the story.  The previous issues felt like they were really building up to an explosive conclusion but the one we got just seemed to fall a little flat, especially considering that a new storyline is starting in issue 7.  It's still well worth picking up however, especially for the superb artwork by Oeming.