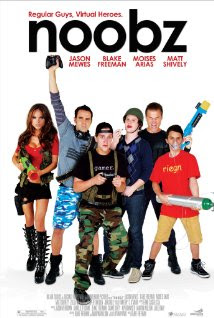 Four friends hit the road to LA to compete in the Cyberbowl Video Game Championship, but will they be able to compete with the worst hangovers of their lives?

I'm going to admit that I went in to this movie completely blind.  I wasn't aware of the incredibly bad reviews that were leveled at the movie until after I'd watched it but you know what?  I think that's a good way of looking at a movie such as this one.

With a title like 'Noobz' and a cast that features Jason Mewes, from the various 'Jay and Silent Bob' movies directed by Kevin Smith, you pretty much know what you are going to get when you press play.

What we have is pretty much a foul mouthed road trip movie with Jason Mewes at his energetic best surrounded by games, gamers and much more.

Is this an original movie?  Far from it.  Chances are you have seen a movie like this or heard some of the style of humour here before but don't ignore it just because of that.  When  I watched this, what I found as that I really enjoyed it.  Maybe I am speaking as a 'Jay and Silent Bob' fan but the broad humour here really worked as far as I'm concerned.

OK, yes there were a far few stereotypes and a few jokes that missed the mark but you always get that with a movie like this.

If you switch off before you watch this movie or you watch it with some friends then it is a hell of a lot of fun to watch.  There were many times that I honestly couldn't stop laughing, especially with the funny cameo by Casper Van Dien.  Zelda Williams, daughter of Robin Williams, also gives a really cute performance as Rickie, the love interest of Jason Mewes character, Andy.

As a Kevin Smith fan and the sort of humour that is in those sorts of movies then you will absolutely love this one.  For a gamer comedy, I was actually pleasantly surprised by how much I enjoyed this movie.  If however, you don't like that sort of movie than in all honesty you will probably end up hating this movie but then again, you probably already knew that didn't you?