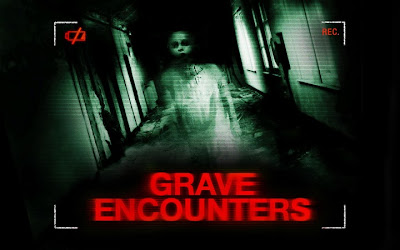 Written and Directed By The Vicious Brothers

A ghost-hunting reality TV show crew arrive at an abandoned psychiatric hospital where unexplained phenomena has been reported for years. Locking themselves inside the building for the night they begin a paranormal investigation, capturing everything on camera. But they quickly realize that the building is more than just haunted - it is alive - and it has no intention of ever letting them leave...

This will be their final episode.

When I read that the trailer for this movie had garnered over 22 million views before the movie was even released, my hopes that this one was going to fantastic were raised a hell of a lot higher than they would normally be for a 'found footage' horror movie.

I have to admit though, I came away from this actually really disappointed.

I'm pretty easy going with my horror movies.  As long as I enjoy them then I class that as a result.  Sometimes I enjoy them for being awesome movies and other times I watch them for being so bad that they're a hell of a lot of fun.  This one however, doesn't fall in to either one of those two camps, instead it falls straight down the middle.

It's not an awful movie by any stretch. The main problem with this movie isn't that it's disappointing, it''s just that it's kind of there.  For a low budget horror movie, the effects are pretty well done, especially the facial effects, but the other moments in the movie didn't really do anything for me.

I did like the way they tried to introduce the back story of the building and why it was haunted but it wasn't anywhere near as effective as it could have been because their attempt at making that part of the footage look vintage just ended up making it look a bit camp instead of scary or spooky.

The cast were OK for the most part but after a while their characters all seemed to merge in to one and that lead me to not really caring all that much about who survived and who didn't.

To be honest, I can't really recommend this very highly.  Neither is it awful, or at least it's better  than the horror movie 'Are You Scared?', but it's not all that good either.  It's just kind of there so maybe one to put on in the background because it doesn't really hold your interest for all that long.

Posted by Pat Scattergood at 14:52