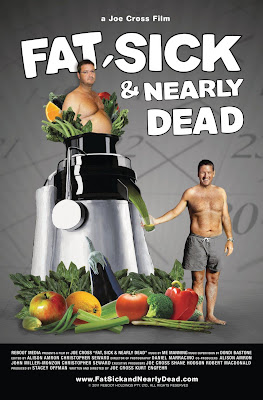 Joe Cross as Himself, Presenter

45 kilograms overweight, loaded up on steroids and suffering from a debilitating autoimmune disease, Joe Cross is at the end of his rope. Tipping the scales at 140 kg, Joe saw a path laid out before him that wouldn't end well. FAT, SICK & NEARLY DEAD is an inspiring film that chronicle's Joe's personal mission to regain his health.

With doctors and conventional medicines unable to help long-term, Joe turns to the only option left, the body's ability to heal itself. He trades the junk food and hits the road with juicer in tow, vowing to only drink fresh fruit and vegetable juice for 60 days. Across almost 5,000 kilometers Joe has one goal in mind: to get off his pills and achieve a balanced lifestyle.

While talking to more than 500 Americans about food, health and longevity, it's at a truck stop in Arizona where Joe meets a truck driver who suffers from the same rare condition. Phil Staples is morbidly obese weighing in at 194 kgs; a cheeseburger away from a heart attack. As Joe is reclaiming his life, Phil begins his own epic journey to get well. What emerges is nothing short of amazing - an inspiring tale of healing and human connection.

I'm always wary of watching documentaries about diets and healthy eating as I find many of them to be very preachy and they end up just being one long lecture telling one side of the story and not the other.  This one however, is vastly different.

This documentary tells the story of a business man named Joe Cross, who is massively overweight, very ill and suffering from health problems.  After deciding to 'reboot' his body by having nothing but fruit and vegetable juice made from a juicer, he starts to go on a journey to not only regain his health but to find himself again.

Normally, a documentary like this would be nothing but a lecture on how good fruit and vegetables are and this story does sometimes fall in to that trap but the thing that raises it above other similar releases is the sheer friendliness of the presenter.  Joe Cross does a great job of giving both sides of the story.  Not only does he  talk about the diet itself and the health properties of fruit and vegetables but he also goes in to the other side of things too.  He talks to people that disagree with him, people that don't care about the diet that he is on and some people that don't even know about fruit and vegetables yet he does it all with charm and poise.  Not once does make the people that disagree look bad, instead treating it as two sides of a coin and that's a welcome change.

However, it's when he meets the trucker named Phil that the documentary takes on an even more heart rending persona.  He meets Phil on his journey and shows him the juicer before offering to help him if he needs it at all.  He doesn't do so to look good to the camera, he honestly comes across as someone who likes Phil and genuinely wants to help the guy.  About halfway through the story, Phil phones him and asks for help in one of the most heart breaking phone calls I've heard in a documentary.

Phil's journey is absolutely inspiring and you can't help but root for him during the transformation as he goes from the lowest he's ever felt right up to how he looks at the end.  It really is inspiring without being made to look melodramatic or overly sentimental.  The story is left to speak for itself and that is a massive strength of this documentary.

One of the other strengths are the little animation scenes that are dotted amongst the various scenes and are really funny while being educational as well.  I really thought they were a good addition to the story being told and set this documentary apart from the various and many other diet and life style documentaries out there.

This one is definitely well worth picking up if you can.  Even if you don't follow the diet that they show the people using here, this is still an interesting and actually well made documentary that you can't help but root for the people involved, especially the trucker named Phil.